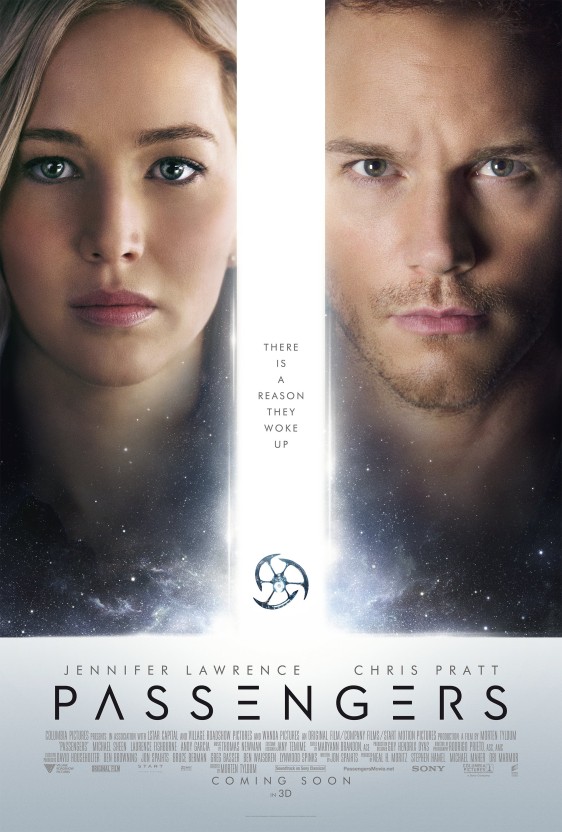 Fair warning. In this critic’s opinion, this film comes pre-spoiled by its own script. As such, I’m going to be rather flippant, including revealing the fate of one of the characters.

There comes a moment in the third act of Passengers when Jim (Chris Pratt) and Aurora (Jennifer Lawrence) are wandering alone through the malfunctioning bowels of their interstellar passenger liner, which is experiencing a “cascading failure” of the ship’s computers. Jim, a mechanic, opens a panel containing some identical pieces of futuristic computer-glass.

“Looks alright to me,” replies Jim, equally dopily, but we know he’s correct. They wander to a door. The door says “Danger!” and won’t open.

“This looks wrong,” says Jim, because he knows literally nothing else.

Then they bust open the door and immediately get sucked into a basketball-sized hull breach, as the atmosphere of an open section of the ship the size of an airplane hangar gets evacuated past them. They wriggle and wobble and throw stuff and obviously stay alive. Note to any would-be space travelers: If the ship doesn’t want to open a door for you, maybe spend a few seconds trying to figure out why before you pry it open. But this scene does sum up the film rather well. Passengers‘ third mistake is its persistent inability to take its characters’ peril seriously. Second is its willful disdain for making intelligent use of its sci-fi scenario. And the film’s first, worst, and most persistent blunder is its unrelenting betrayal and misuse of Lawrence.

Let’s back up. Because there was some promise to the film’s setup. Bound from Earth to an offworld colony, the interstellar passenger liner Avalon is 30 years into its 120-year journey (just like Star Wars through US copyright law, amirite?), with its 5,000 passengers and 285 crew frozen in stasis pods for the duration (on-screen text helpfully informs us of all of this in the first 15 seconds). The ship autopilots itself into an asteroid field, which quickly overwhelms the shields and causes damage. One of the many ensuing malfunctions is the unexpected awakening of Jim Preston (Pratt), who pops out of his stasis pod, follows the holographic instructions to find his quarters and rest up, and quickly realizes he’s the only person awake. He has no ability to put himself back to sleep, so he’s all alone, condemned to never see his shiny new planet, and forced to live out his life alone in space. He wanders the ship, takes an unaccompanied spacewalk, grows a long beard, plays both of the video games, and develops a healthy functional alcoholism with the assistance of the friendly android bartender, Arthur (Michael Sheen). He also peruses some technical manuals and makes a few hamfisted attempts to fix his situation, including failing to break into the apparently impenetrable crew quarters. All of this passes in montage form, and we don’t get any real sense of what he’s trying to do or how difficult it is (except for pounding on the crew’s blast doors with a sledgehammer and welding torch), and it quickly ceases to matter. He’s alone, a year passes, and he gets a bit weird. Pratt does a passable job with these scenes, which is a very good thing, since Jim loses my sympathy the moment he stumbles upon Aurora’s pod, develops an instantaneous obsession with her, and ponders waking her up to join him in solo interstellar damnation, cursed to live out her life alone with her secret murderer.

I must emphasize, while I was never in any suspense about whether he would go through with this, the movie at least had the good sense to briefly treat this like the Bad, Bad Thing it is. The script was aware of it, and Jim himself was aware of it. His interactions with Arthur, the eternally non-judgmental bartender, take on a (presumably) deliberate Shining vibe, and the movie treats his decision like the unthinkable act that it is. And I was still with it, even at this point. Isolation is a proven means of psychological torture, and I could fully buy that Jim had become unhinged and was ready to do something unconscionable to relieve his situation. Comprehensible, if not condonable. And on a more trite level, man’s inhumanity toward a randomly selected beautiful woman is a tale as old as time, and if this woman were given a chance to learn the truth of her fate, react like a human being, then decide what to do next, this could have been a serviceable psychological thriller in which Pratt could have taken on the acting challenge of being the unadvertised villain.

The problem is, the film seems mostly unaware of the gravity of what it has done, and becomes a straight romance from that point on. WALL-E composer Thomas Newman‘s warm synth-infused score pours over the tragic tale of a pair of lone accidental voyagers, linked romantically by happenstance, A-List attractiveness, and some good, old-fashioned, thrust-free, PG-13 space-sex. Aurora is a writer whose sole unmotivated contribution to the plot (apart from making her fella some breakfast and patching up the robot bartender with her makeup skills – no, I’m not joking) is some schmaltzy “Dear Diary” voiceover from the terrible book she’s writing to be read by no one, talking about how they’re all just Passengers on the ship of fate and they didn’t plan to find each other but they did and I almost literally fell asleep while typing this. Like the put-upon ’50s housewife that she is, Aurora is helpless to advance the story, which constantly denies her agency and punts her from one life-altering decision to the next. But hey, at least we get to watch her jog and swim a bit, right? Make no mistake: This film’s concept and treatment of Aurora is obscene. And its script, characters, and Avalon itself conspire to force Aurora to fall in love and get betrayed, then tap their collective foot impatiently because they can’t wait on her precious timetable of forgiveness. Stuff’s exploding and we need to fall in love and fix it already!

Laurence Fishburne briefly (accidentally) awakens as a member of the ship’s crew, and honestly, I was a bit relieved. He quickly realizes what Jim has done to Aurora, and I expected some sort of human moment between the two non-murderers aboard the ship. One in which J-Law could look at him and say, “That was pretty f’d up, right? Does this ship have a brig?” And then he could nod, and they could learn to play chess for the next 90 years. But no – instead, he gives them just enough information about the ship to let them bumble around fixing it, hands his authorization wristband to Jim rather than Aurora, and tells her that a drowning man (he means Jim!) will always try to pull people down with him, and “that don’t make it right”, but… And then he coughs, which poorly-written movie characters only do when they’re terminally ill, and is dead a few minutes later from unspecified ailments inflicted by his rapid unscheduled thaw. This would be an excellent time for Aurora to point out, “See what happened to that guy? You risked that exact thing happening to me. Dick.”

But she doesn’t, because the film is completely unaware of that. No matter. Did I mention that Passengers is a bad sci-fi film as well? I could’ve overlooked Avalon‘s nosedive into a dense asteroid field, a cliché as old as a broken moon in the sky. But it also can’t be bothered to make consistent use of its spin gravity (or is it magical artificial gravity?), or use even the slightest bit of technobabble to describe the ship’s peril or the difficulty of fixing it. This is a sci-fi drama written with deliberate simplicity by Mitchell and Webb, or maybe accidental stupidity by the dullard who co-wrote Prometheus, which might explain his affinity for robo-surgery tubes. And don’t get me started on J-Law nearly drowning in the floating pool.

I can already see people trying to ennoble the setup of this film. He’s lonely! He needs company. You don’t know what you’d do in this situation! Let me be clear here. I don’t mind a film depicting a character committing such an act. I don’t even mind a film in which his victim decides she’s going to accept the intractable situation and forgive him. Or in which she decides she wants revenge. Or in which she throws them both out an airlock. Or in which she reacts in any way whatsoever. Passengers isn’t bad because it depicts a character doing a bad thing – it’s bad because it never acknowledges the reality it’s creating. And the result is as dumb as it is morally reprehensible. It insults its characters and its audience, and should be avoided like the plague.