First we met the Devil, then we got Buried, and now, in the latest installment of this inadvertent “One-Word, One-Room” marathon, Glenn and Daniel pull on their ski boots and review Frozen, a horror film new on DVD and Blu-ray from writer/director Adam Green, starring Shawn Ashmore, Emma Bell, and Kevin Zegers. (19:59) 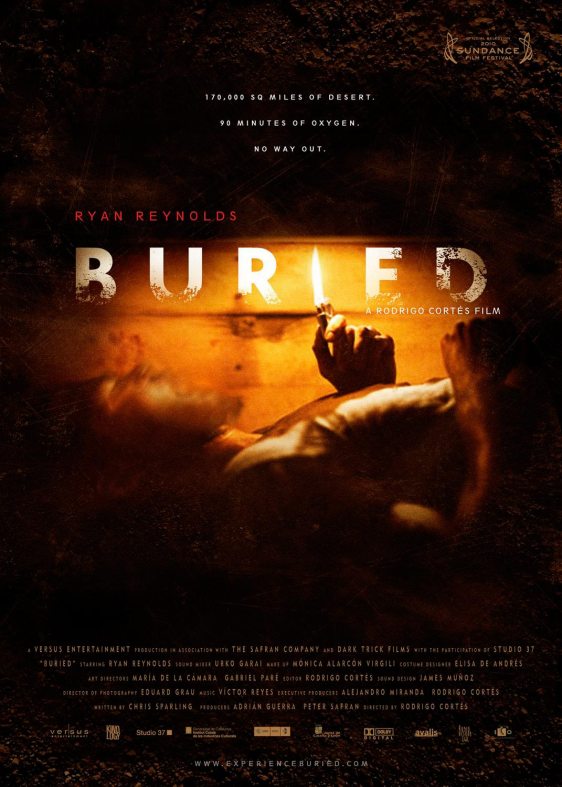 Buried is viscerally unnerving from the very first frame. After a lavishly-scored, Hitchcockesque title sequence, we begin the film in complete darkness, hearing the confused and muffled grunts of Paul Conroy (Ryan Reynolds), an American civilian contractor in Iraq who has been kidnapped and buried alive in a coffin. His hands are tied, his mouth is gagged (for some reason), and his only immediate light source is a Zippo lighter from his pocket (surely not the best item to be using with a limited air supply!).

The film’s premise seems to be a real-world expansion on a brief sequence in Kill Bill: Volume 2 – a character is buried alive, and we live the entire experience from his perspective. I’m not particularly claustrophobic, but even I was getting physically uncomfortable by the end of the film. However, it is to the film’s credit that I wasn’t feeling it even sooner. The film lasts 100 minutes, nearly all of which is spent in the coffin. But by way of a borrowed cell phone and some masterful sound design, Buried feels almost like an old-time radio play, crafting the illusion of a much larger world. For a locked-room thriller with an even more confined scope than Phone Booth, this film’s expansive feeling is an impressive achievement.

Speaking of achievements, this may be the most electrifying performance yet from Ryan Reynolds. Like Tom Hanks in Cast Away before him, Reynolds has crafted a masterful one-man show, and he never lets up on the stakes. Paul is dying alone, and Reynolds deftly conveys his ratcheting hopelessness and frustration.

“WHAT ARE YOU DOING, RIGHT NOW, TO GET ME OUT OF HERE?!”, Paul screams into the phone at Dan Brenner (voice of Robert Paterson), head of the coalition military’s Hostage Working Group. Brenner is easily Paul’s closest ally, working tirelessly to find his captors before it’s too late, but he ends up working a surprising amount of hostage negotiator voodoo on Paul himself. Brenner has to try and calm Paul down and preserve his air supply, which includes trying to protect him as much as possible from the true horror of the situation. The tense dialogue between these two is some of the most effective in the film, and Paterson’s vocal performance certainly helps carry it. He casts Brenner as a caring but pragmatic ally – like the proverbial starfish-thrower, he’ll save as many hostages as he can, despite knowing that he won’t be able to save most of them. 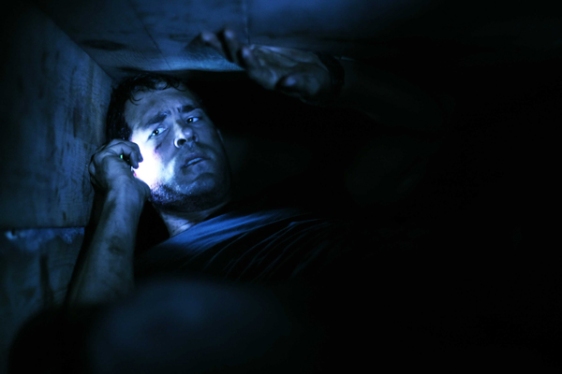 There was also a shining performance from veteran character actor Stephen Tobolowsky as the voice of Alan Davenport, the company’s head of personnel. His scene very nearly took me out of this film with its utter hopelessness, and yet the whole thing seemed depressingly plausible, owing a great deal to both the screenwriting and Tobolowsky’s eerily calm demeanor. The indifference of the outside world was a resounding theme throughout the film, and this scene made for a shocking bookend to that theme. Rather than being taken out of Paul’s plight, I was very nearly weeping for him.

With scenes like this in mind, the tone of the film is a bit hard to pinpoint. The direction is very reminiscent of Hitchcock – Cortés and cinematographer Eduard Grau were able to compose a remarkable variety of shots in such a cramped space and dismal lighting, occasionally cheating the outside of the coffin and moving the camera outward to further showcase Paul’s isolation. Many of the phone calls were punctuated with axial cuts (in which the camera jumps closer and closer to his face with each statement), along with sharp, jarring musical cues… Indeed, the direction and score kept the film’s feeling very light, even as Paul’s situation deteriorates. There is a sequence in the second half in which Paul has to deal with [an unexpected spoilerific difficulty – but trust me, you’ll know what I mean]. This scene and its resolution were utterly ridiculous, but very well designed and shot. If I were watching a more cartoonish thriller, this moment of levity would certainly not have bothered me, but it just seemed completely out of place in light of the more dour scenes that follow.

But perhaps a mixed tone is exactly what this film needed… In many ways, Buried came out at just the right time. Imagine this film seven years ago… At the onset of war amid an economic boom, shortly after the “Mission Accomplished” banner, we all heard about the lavish, six-figure civilian contractor jobs available for reconstruction in Iraq. Every war has its profiteers, and whether or not these contractors qualify, I could certainly see people both here and in Iraq regarding them with (at the bare minimum) complete indifference. You takes the job; you takes your chances, and that includes the possibility that criminals will kidnap and murder you. This mentality is rarely so black-and-white in the real world, but the film’s presentation of it feels authentic. Now that the war and economy have both wound down a bit, it’s much easier to see Paul as a sympathetic everyman, just trying to do right by his family. He knew this was a possibility, but he didn’t ask for it, and he certainly didn’t deserve it.