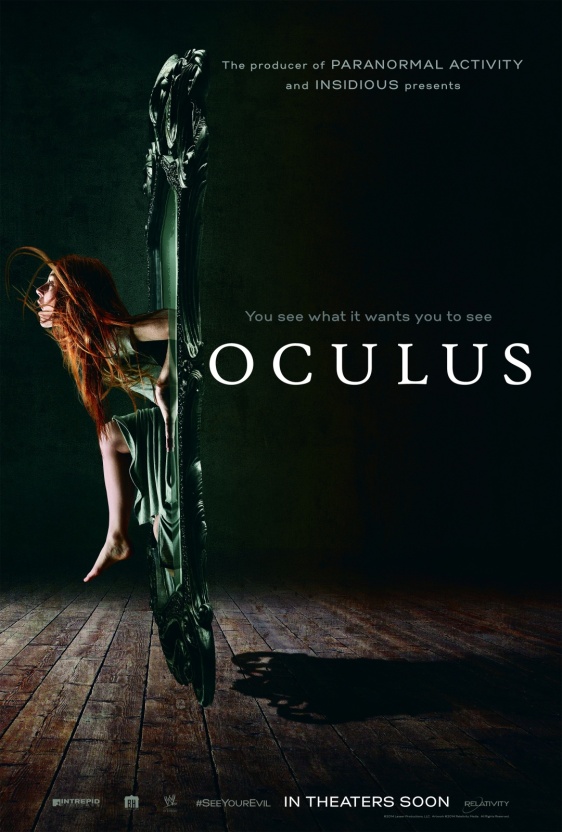 The James Randi Educational Foundation offers a $1,000,000 prize to anyone who can demonstrate, under proper observing conditions, evidence of any paranormal, supernatural, or occult power or event. Mike Flanagan’s Oculus presents a familiar scenario – a cursed object (in this case, a haunted mirror) – that can manipulate reality for anyone in the vicinity. And the film’s heroine, Kaylie Russell (Karen Gillan), seems just as committed as Randi to demonstrating the reality of these powers under properly controlled conditions. For a film that is about both mental illness and supernatural phenomena, Oculus has a magnificently skeptical attitude about the subject matter. Kaylie begins the film by setting up a series of battery-powered cameras, timed events according to battery-powered clocks, and, most importantly, a dead-man switch, in the form of a boat anchor, that will automatically destroy the mirror if its mechanical timer is not deactivated every thirty minutes. It’s Paranormal Activity as acted out by someone with basic critical thinking skills.

Kaylie is not alone in this quest – she is joined by her brother Tim (Brenton Thwaites), who has recently been released from a juvenile mental ward following his 21st birthday. The tragic events which led to his commitment are hinted almost immediately in dialogue, but revealed in detail over the course of the film. And the threat from the mirror becomes clear – it can manipulate either the perceptions of the people in the vicinity, or objective reality. And as the film gradually demonstrates as its masterful editing cuts back and forth between fantasy, reality, and flashback, there’s not a lot of difference between the two. This is really what makes Kaylie such an interesting character – her determination to expose the mirror’s true nature is only matched by her arrogance in presuming that she is any match for it.

Gillan – who is effecting a rather impressive American accent over her native Scottish brogue – plays Kaylie with a tough-as-nails attitude and convincing determination to prove that Tim is not responsible for their family’s tragic past- a claim that is essentially unprovable. And yet her biggest rival, apart from the mirror, is the brother himself. After over a decade in a mental hospital, Tim is well-armed with the kind of critical, reflective thinking (and sheer humility) that it takes to question one’s own perception of reality. Indeed, he has had it drilled into him, and probably reinforced with pharmaceuticals. He criticizes Kaylie for anomaly-hunting – poring through thousands of records to find the dozen or so that fit her tragic story. He trots out the basic logical standby that correlation does not prove causation. And yet, Tim is also biased in favor of reality as we know it, and Kaylie pushes back with a number of convincing methods of objectively measuring and demonstrating the mirror’s “influence”- a radius of potted plants for it to wilt, lights for it to turn off, and so on. 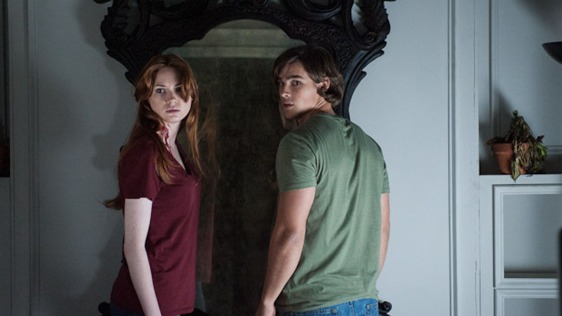 From this point on, I can’t discuss the finer details of the film’s story without hinting strongly at the mirror’s true nature. So instead, I’ll simply say that this film maintains tension remarkably well. The cat-and-mouse setup is strong, and while the third act leans a bit too far toward jump scares, the film’s gradually escalating tension is fueled by the fact that it’s simultaneously telling two taut and interesting stories. The first is the backstory of Kaylie and her brother as children (played wonderfully by Annalise Basso and passably by Garrett Ryan). We already know the ending of the first story, but as it plays back for the audience, it seems to simultaneously play back in the minds of the adult Kaylie and Tim in a way that could certainly sway the outcome of the present-day story. This film uses every trick up its sleeve to mess with the audience’s perceptions of reality in the same way as it does with its characters. Each time a new outrage appears onscreen, the audience is left to question whether or not they can trust what they’ve just seen, even as the characters are doing the same thing in dialogue.

This really seems like it should bother me on a structural level. The more the film messes with its internal narrative coherence, the less I should care what happens to its characters. But there are several reasons why this method works so well. First, as mentioned above, the film messes with its characters and the audience in equal measure. Second, these are intelligent, well-meaning characters on what seems from the outset like a doomed quest for revenge against an unbeatable enemy – whether that enemy is a magic mirror or their own fractured sanity and violent impulses. And third, while they didn’t choose what happened to their parents, they did choose what is happening to themselves. Mirror or no mirror, they are the architects of this film’s insanity, and they really didn’t have to be.

In a way, this makes the film’s screeching halt of an ending feel perfectly fitting. In a flash, we’re back to reality, and left to make sense of what has happened. That said, I could certainly see someone walking out of this film and listing every one of the factors above as shortcomings of the film. But in the end, Oculus terrified me on many levels (several of them through the varied horrifying expressions of Katee Sackhoff as the duo’s flashback-mother). This film is a marvelous companion piece and rebuttal to James Wan‘s The Conjuring, a film that took for granted both the veracity of its heroes’ supernatural claims, and their nobility and good intentions.

There are no good intentions in this film. Only hubris and rationality in the face of unrelenting terror.

PS: Lest I end on such a pretentious line, I should probably mention that when the WWE Studios banner inexplicably appeared before this film, it elicited an embarrassingly loud “Huh.” from me, followed by chuckles across my screening audience. Now…I didn’t see John Cena in this film, but I can only assume that the WWE is interested in anything that can make its viewers question reality during a scripted performance. (BOOM!) But I suppose if History and The Learning Channel can let their content drift so far off course, we can afford the same privilege to pro wrestling.

New to the series? Check out our HIMYM Episode Skip List here!

In this special TV edition of the FilmWonk Podcast, Glenn and Daniel take a deep dive into one of their favorite sitcoms, How I Met Your Mother, created by Carter Bays and Craig Thomas, which recently concluded its ninth and final season on CBS. And we had plenty to say about that ending. Spoilers for the entire series run will begin after about the 10 minute mark (55:15).

Listen above, or download: How I Met Your Mother (right-click, save as, or click/tap to play on a non-flash browser)