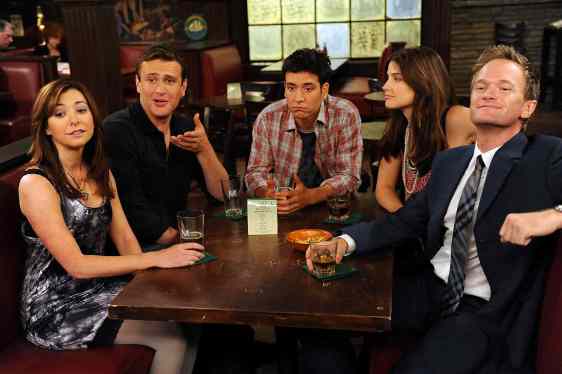 Six weeks ago today, the CBS sitcom How I Met Your Mother ended its run after nine seasons and 208 episodes. The tale of these five friends and their decade-spanning relationships (including several decades in the future!) spoke to us at FilmWonk sufficiently that we recorded a special TV edition podcast about it. On that episode, both Daniel and I came to two conclusions: First, this is one of the finest sitcoms on television. And second, like all sitcoms, it goes on for a bit too long.

To that end, we’ve cast our eyes toward the casual viewer who is interested in watching the series, but is intimidated by its length (self-five!). We’ve spent the last six weeks carefully rewatching the entire series and putting together a list of the episodes that, in our opinion, can be safely skipped without affecting the outcome of the series. The list and descriptions were primarily written by Glenn, with contribution by (and occasional vociferous argument with) co-host Daniel.

Criteria
Any episode that meets at least one of the following criteria is not considered skippable:

Spoiler Policy
This episode guide is intended to be read as you watch the show for the first time. The description for a skippable episode will generally spoil that specific episode, especially if there is some minor piece of information that you need to know for future viewing (major developments won’t generally be skipped). Additionally, an episode description presumes you are caught up to that point in the series. For example, an episode description in Season 6 might make reference to events that occurred in Season 5. And finally, some episodes are skipped because they contain themes or material that are addressed similarly (or in a better way) in a future episode. To that end, a description might mention the title of a future episode, but no specifics about future episodes.

Stick around at the end for a “Best of the Series” list, and concluding remarks.

Careful readers will note a couple of things. First, there are 52 episodes on this list. Even more careful readers will note that the real total is 50, since I included two episodes that shouldn’t actually be skipped. But it’s cleaner with 52, because that’s exactly 25% of the series’ run. In this critic’s opinion, 1 out of 4 episodes of How I Met Your Mother can be safely skipped without affecting the outcome of the series.

But the second thing you’ll notice is that I only truly disliked a handful of the episodes listed above. And it is my sincere belief that this is one of the finest sitcoms on television. As I write this conclusion, the series finale aired exactly six weeks ago, and I breezed through nine seasons and 208 episodes of this series during that time like it was nothing. It was an absolute pleasure watching this series again, and I did not create this list to suggest otherwise.

In fact, I learned one additional lesson while re-watching the series, and it was something that was lost on me the first time through. It is a common vice of sitcoms to overstay their welcome, and HIMYM is no exception. But this is generally accompanied by an early peak and a steady run of increasingly lousy episodes with no clear end or trajectory in sight. I believe How I Met Your Mother thoroughly avoided this pitfall, and to demonstrate this, I’ve composed another list to finish out this article – three episodes from every season that are unquestionably among the best of the series.

“Best Episodes of the Series” in each season:

This is a show that understood and reinforced its themes right to the end – a show whose grand mystery about life and love was constantly dropping clues for any lost and lonely twentysomething viewers – to say that even though you might go through myriad struggles and false starts, you’ll eventually figure out your life. It advanced and repeated the idea that true love is worth pursuing because it’s simply the best thing we do. And yes, as Ted Mosby acknowledges when he states that theme aloud in “The End of the Aisle” (S09E22), that is a cheesy message. But like most cheesy messages, it’s one that we desperately want to believe is true. And it’s worth repeating.

New to the series? Check out our HIMYM Episode Skip List here!

In this special TV edition of the FilmWonk Podcast, Glenn and Daniel take a deep dive into one of their favorite sitcoms, How I Met Your Mother, created by Carter Bays and Craig Thomas, which recently concluded its ninth and final season on CBS. And we had plenty to say about that ending. Spoilers for the entire series run will begin after about the 10 minute mark (55:15).

Listen above, or download: How I Met Your Mother (right-click, save as, or click/tap to play on a non-flash browser)