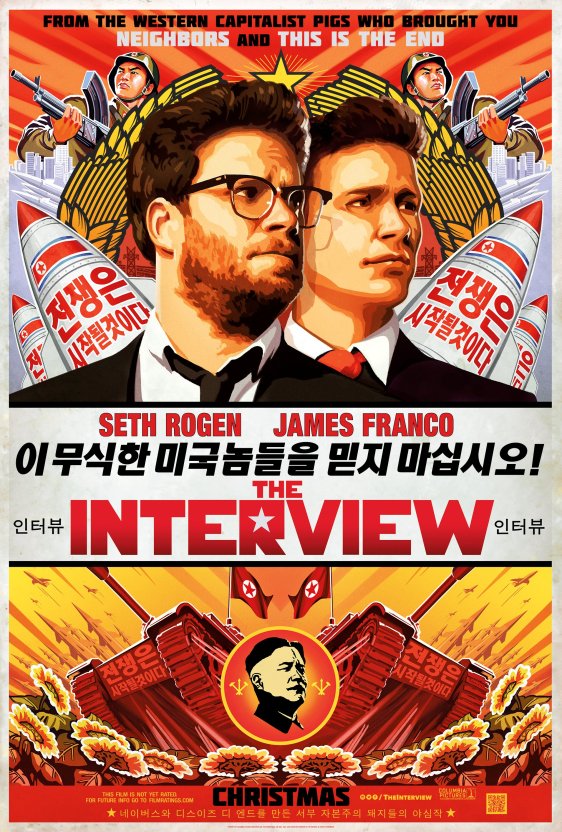 Glenn and Daniel just couldn’t resist shooting their mouths off in the face of two regimes – both Kim and Rogen/Goldberg. Tune in for this special end-of-the-year bonus episode as we discuss The Interview, the Sony hack, the DPRK regime, and whether it was really all worth it. You already know the answer, but it’s a fun conversation nonetheless (24:55).

FilmWonk rating: N/A out of 10

Listen above, or download: The Interview (right-click, save as, or click/tap to play on a non-flash browser)

Tomorrow, our intrepid podcasters Glenn and Daniel venture to an actual theater to check out The Interview. But we don’t expect we’ll have nearly as much to say as we did about two end-of-the-year awards contenders. First, we experience our first Angelina Jolie-directed film, the WWII survival drama, Unbroken. Then we venture into a refreshingly dark and complex take on the sports genre, Foxcatcher, featuring a terrifying and transformative performance from Steve Carell. Strap in and enjoy this holiday double-header – we certainly did! (57:44)

Listen above, or download: Unbroken, Foxcatcher (right-click, save as, or click/tap to play on a non-flash browser)

Naming the five armies involved in the final Hobbit film is a bit like naming the five factions of Divergent. Or, for that matter, the thirteen dwarves in this film. There are probably certain superfans who can manage it with minimal Wikipedia breaks, but the film itself does very little to establish the importance of every last one of them. At the end of The Desolation of Smaug, the battle for the mountain of gold is…still very much in progress, and really only gets settled when Bard the Bowman (Lucas Black) takes down the dragon Smaug (Benedict Cumberbatch) with a gargantuan steel arrow – but only after it incinerates his entire town. The refugees of Laketown are the closest this film offers to a group whose motives remain pure throughout the film. They’ve had their home destroyed through no fault of their own, and they’re really just trying to survive, and claim the portion of the treasure that was promised to them. Since…they will likely freeze and starve to death without it. And so it is that Bard, newly crowned dragonslayer and sorta-king of the Laketown remnant, attempts to negotiate with Thorin Oakenshield (Richard Armitage), who guards the mountain and its gold with nothing more than a band of dwarves and a titular Hobbit, Bilbo (Martin Freeman).

For reasons that are vague and ill-justified (“dragon-sickness”?), Thorin has turned into a bit of a heartless miser in the roughly 20 minutes of movie-time that have passed since the end of the second film. He refuses to turn over the gold to anyone (“Not…one…single…piece.”), and has no sympathy for the town that was destroyed due to his own actions, despite their skillful dispatch of the gigantic flaming hurdle in the way of his massive pile of shiny things. Oh, and for some reason, Bilbo is concealing the Arkenstone, a glowing object of undefinable purpose, in his coat pocket next to the One Ring. Thorin wants the stone badly, and suspects everyone around him of stealing it (it’s not paranoia if you’ve got a burglar in your employ). According to Balin (Ken Stott), the stone might make Thorin’s madness better, or worse, but no one bothers to mention what purpose the stone is actually meant to serve, even if I recall some vague bluster about “uniting the dwarves” from the first film.

In case it’s unclear, I flat-out hated the first hour of TBOTFA. Whether we’re talking about Thranduil the elf-king (Lee Pace), who shows up on mooseback with an army to reclaim a different set of shiny things from inside the mountain, Alfrid (Ryan Gage), a human with far too much screentime for his sniveling motivations, or the dwarf army (led by Billy Connolly) who shows up to defend the treasure, not a single character’s motives were admirable or sympathetic here. This is a resource war, and not a terribly interesting one. Any time a character began bloviating about his birthright or promises or honor, my eyes quickly glazed over. Really, the only honest antagonists were the two Orc armies, led by Azog the Defiler (Manu Bennett) – whom I could’ve sworn was already killed by Thorin in the first film – and Bolg (John Tui), his son.

There were moments in the original Lord of the Rings trilogy where hordes of unnamed (and mostly CGI) characters were battling it out for our amusement. But it was always intercut with characters that we cared about, and it never felt as empty or small as it did here. This is a battle that is ostensibly as grand as Pelennor Fields, but it kept all of the main characters shuffled off into lesser side action, mostly atop the nearby Ravenhill. And ironically, while this had the inadvertent effect of rendering the large-scale battle sequences incredibly tedious, it actually made the side-combat rather compelling. Dwarf commandos storm the orc leadership atop a mountain, Bilbo sneaks off to warn them of incoming trouble, and a series of thoroughly entertaining boss fights and intermittently tender moments ensue. This sequence encapsulates what few elements worked about this film, even during the thoroughly dysfunctional first hour. When characters are acting for sympathetic reasons, then all the pristinely-rendered action starts to have meaning once again. The elf-maiden Tauriel (Evangeline Lilly) hastens to save her beloved dwarf Kili (Aidan Turner) from an incoming orc-horde. Legolas (Orlando Bloom) assists Tauriel despite knowing that his own affection for her is unrequited. Bilbo maintains his friendship for Thorin despite their earlier falling-out. Even Bard, who does very little of consequence after killing the dragon, is seeking only to save his family and townspeople.

When this film worked, it was entirely due to the strong performances and relatable motivations of its characters. But it is unquestionably the weakest entry in the Hobbit trilogy, remaining as dense and bloated and inconsequential as ever. By the time the Eagles – those perennial closers – showed up to dispatch the secondary orc army just as they had barely shuffled onto the field in the distance, I started to wonder if even Peter Jackson had lost interest in this lame skirmish. And when a dying character belched forth the film’s moral, of the importance of valuing home and family over gold, it was all but confirmed. Enjoy our gold, Hollywood, even if you got less of it than the first time around. You’ve milked this story for all it’s worth and then some. And while we got some pretty solid cinema technology out of it (48fps 3D is still a marvel), it was wrapped in a languorous, incomprehensible spectacle that seems less likely to stand the test of time than Avatar.

This week on the podcast, Glenn and Daniel tackle the latest emotional journey from Oprah‘s Book Club, Wild, featuring the Pacific Crest Trail hike of memoirist Cheryl Strayed (Reese Witherspoon), as rendered by the director of last year’s triumphant Dallas Buyers Club. The result is a mixed bag of triumphant trail experiences and an uneven backstory – we liked, but didn’t love it. (26:58)

Listen above, or download: Wild (right-click, save as, or click/tap to play on a non-flash browser) 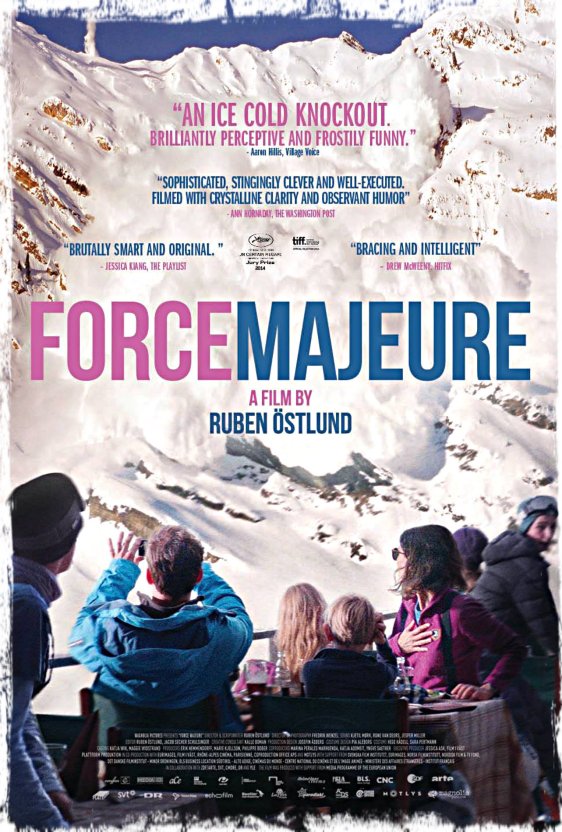 This week on the podcast, Glenn and Daniel tackle a wondrous dilemma of heroism, masculinity, and unexpectedly hilarious drone flying in Force Majeure, a Swedish family dramedy set in a ski resort in the French Alps. Note that our review contains spoilers for Julia Loktev‘s 2012 film, The Loneliest Planet, for reasons that should quickly become clear (45:00).

Listen above, or download: Force Majeure (right-click, save as, or click/tap to play on a non-flash browser)