In this week’s podcast, Glenn and Daniel strike down upon Quentin Tarantino‘s The Hateful Eight with great vengeance and furious anger, but you will know that their name is FilmWonk, when they spend twice as long talking about Peter Landesman‘s Concussion. Note that given the fact-based narrative, we’re not too shy about spoiling the real-life NFL player deaths depicted in the film (55:16).

Listen above, or download: The Hateful Eight, Concussion (right-click, save as, or click/tap to play on a non-flash browser)

It would be easy to say that Spotlight, director Tom McCarthy’s dramatization of a 2002 newspaper investigation that first brought to light the rampant sexual abuse and cover-ups in the Catholic Church is the same film as Peter Landesman’s Concussion, dramatizing the outside medical investigation of chronic concussion-related injuries in the NFL. But while they hew to a similar formula, they really have completely different approaches to both their underlying subject matter, as well as to institutional guilt itself.

Dr. Bennet Omalu (Will Smith) is introduced in Concussion as a capable and unbiased outsider (both as an immigrant from Nigeria, and a non football-fan) who discovers chronic (but subtle) neurological degeneration in the brains of deceased former NFL players. He comes with impeccable credentials and education, and both he and the film know that he’s always right. He’s Dr. House without the sarcasm or pill addiction. He is, in essence, a paragon. And this makes it all the more difficult to accept him as an unapologetic moral crusader in his investigation of a newly named condition, Chronic Traumatic Encephalopathy (CTE), a condition that causes former NFL players to undergo rapid neurological degeneration similar to Alzheimer’s at a young age, often coming to violent self-inflicted deaths in the process. The reason why his moral crusade doesn’t play nearly as well is because, simply put, the film has no clear idea of what the NFL might have known about the condition and when – and scientific discovery doesn’t work on a schedule. Omalu is well-meaning, but he only has a handful of initial cases, and while it’s easy to make comparisons between the NFL’s alleged “We don’t know and we don’t want to know” attitude, and the Catholic Church’s well-established institutional enabling and protection of pedophile priests (or, if you like, the tobacco industry as depicted in Michael Mann’s The Insider), the films really are dealing with completely different scopes of corruption and institutional guilt. There’s nothing ambiguous or scientifically controversial about child molestation. It’s either happening, or it’s not. A newly discovered medical condition that is poorly understood and difficult to detect (not showing up on brain scans of the living) is a bit harder to be so dogmatic about.

Meanwhile, Spotlight meticulously catalogs the varied and sprawling investigative threads of its Boston Globe reporters – Mike Rezendes (Mark Ruffalo), Walter Robinson (Michael Keaton), Sacha Pfieffer (Rachel McAdams) – we see clergy, attorneys, reporters, therapists, parents, teachers, administrators, and parishioners, all of whom had some level of knowledge about the situation, and all of whom were complicit on at least a minimal level in allowing it to continue. As lawyer Mitchell Garabedian (Stanley Tucci) says halfway through the film, “If it takes a village to raise a child, it takes a village to abuse one.” This is a damning quote because the film so convincingly makes the case that the abuse was widespread, widely known, and only came to light when people (including victims) were willing to come together and put a stop to it. Contrast this with Concussion‘s clunky proclamations about how millions of Americans love the game, and the NFL employs hundreds of thousands of people, and cities and states have built massive stadiums even as they can’t afford to fund their schools (which struck below the belt as far as my home State of Washington is concerned), and it really just doesn’t have much bite to it. Even as Dr. Omalu gets late-night phone calls asking why he wants to “vaginize” football, the stakes are thoroughly muddled. Every change that has ever been made to American football has “ruined the game” in someone’s eyes, and it’s hard to imagine that trying to reduce the frequency and treatment of concussive blows to the head would be any exception. Yes, America loves football. And perhaps the NFL knew enough about CTE that they should’ve done something earlier to try to prevent any further cases of it, or at least stop trying to wriggle out of paying adequate disability pensions for those players who were affected by it. But apart from the men we see succumbing to their illness and dying on-screen, any guilt (whether individual or institutional) is poorly delineated, and no solutions are offered. Given that Luke Wilson appears in an essentially silent role as NFL chairman Roger Goodell, I can’t help but wonder if any desperately-needed context was left on the cutting room floor.

Another way the films differ is in how they depict the effects each investigation has upon its investigators. Dr. Omalu’s devastated outlook as the NFL makes various attempts to blackball and discredit his research is probably the most interesting part of the film, if only because Will Smith so thoroughly sells his disappointment that America didn’t live up to his immigrant expectations. “This is America,” he says to his future wife Prema (Gugu Mbatha-Raw) early in the film, “Where you must be the best version of yourself.” As he comes forward to tell the NFL about this problem (by way of a case study in a prestigious medical journal), he genuinely believes that A) The NFL couldn’t possibly have known, and B) They will thank him and want to work with him. Obviously, this isn’t what happens. And Dr. Omalu is devastated to learn the true nature of the country that he has adopted as his own.

Beyond this, there is little in the way of personal stakes involved for this investigation. Sure, he’s paying for many of the medical tests himself, but we never really get a sense that this is causing him any hardship. He doesn’t know football, understand it, or enjoy it. This makes him non-malicious, but it also makes his arc as an outsider and moral paragon that much less interesting. Dr. Julian Baines (Alec Baldwin), a former Pittsburgh Steelers team doctor, has a bit more reluctance about attacking the game he loves, but he only ever voices it after he has already committed to helping Dr. Omalu. So any internal conflict that he may have experienced feels fleeting. The inevitable moments of confrontation are well-acted, but feel perfunctory and unrealistic. When Dr. Omalu meets privately with an NFL doctor, Elliot Pellman (Paul Reiser), and gives an impassioned sotto voce demand that he “Tell the truth!” about what’s going on, Smith sells the moment with his acting, but it has not been earned in the least, if only because science doesn’t deal in practical or moral certainty. It just deals with increasing degrees of understanding, to the point where we can reasonably make decisions based on them. But I suppose, “You should conduct a longitudinal study on the issue and begin taking basic precautions out of an abundance of concern for the players’ well-being” doesn’t roll off the tongue quite as well.

Contrast this with the Globe reporters, who are clearly affected by every moment of Spotlight‘s investigation. All of them are lapsed Catholics, most of them are native Bostonians, and they have no desire to eviscerate the institutions that have comprised the fabric and background of their entire lives, and will continue to surround them after the story breaks. They’re certain of the rightness of what they’re doing, and they’re also frightened, angry, and unsure what the right approach to the story really is. Is it just a few bad apples, or is it the entire institution that’s corrupt? Which is worse – perpetrating these monstrous acts, or conspiring to cover them up, enabling further victimization? And at what point do you have a level of certainty that allows you to tell this story publicly? And when Rezendes finally loses his temper and demands that the Globe print the story immediately, Ruffalo has thoroughly sold his personal stakes in the matter, and the reactions of the rest of the Spotlight team clearly indicate that he’s just screaming aloud what all of them are struggling with internally. This struggle, with how to tell the right story at the right time, is the essence of good journalism, and Spotlight depicts it as well as it has ever been put to film. It demands that the viewer place themselves in the shoes of people scrambling in the dark to reveal what had previously been unimaginable.

In the end, both films have value, even if Spotlight has a treads a much more difficult path toward the story that it’s looking to reveal, whereas Concussion often just feels like it’s going through the motions (everything to do with Dr. Omalu’s wife, for instance). However, one area in which both films excel is in depicting the victims of their respective institutions, and it is perhaps where both films deserve credit for elevating the importance of what they are depicting. David Morse, Adewale Akinnouoye-Agbaje, and Matthew Willig all play former NFL players whose horrifying deaths are at the center of Concussion‘s mystery, and even if it lacks the moral clarity of Spotlight, the viewer is at least left with a sense that we owe these men an explanation for their largely uniform mental deterioration. Conversely, the victims of Catholic clergy sexual abusers are depicted in a variety of states, both in deep denial, chemical dependency, and relative normality. There is no such thing as a perfect victim outside of fiction, and between the two films, Spotlight is certainly less interested in perfection. It shines a light into the darkness, and shows us whatever may appear there. 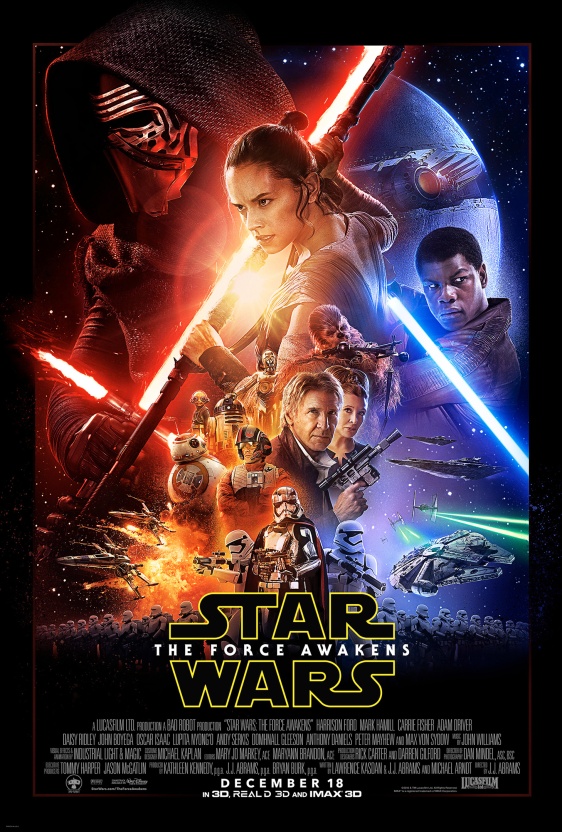 In this week’s podcast, Glenn and Daniel watch two ladies of television in a venue where they can prolifically swear, and then they swear prolifically at the Internet for betraying them with Star Wars spoilers. Rest assured that our spoilers will come with a warning, and the promise of swift retribution! (41:59).

Listen above, or download: Sisters, Star Wars VII (right-click, save as, or click/tap to play on a non-flash browser)