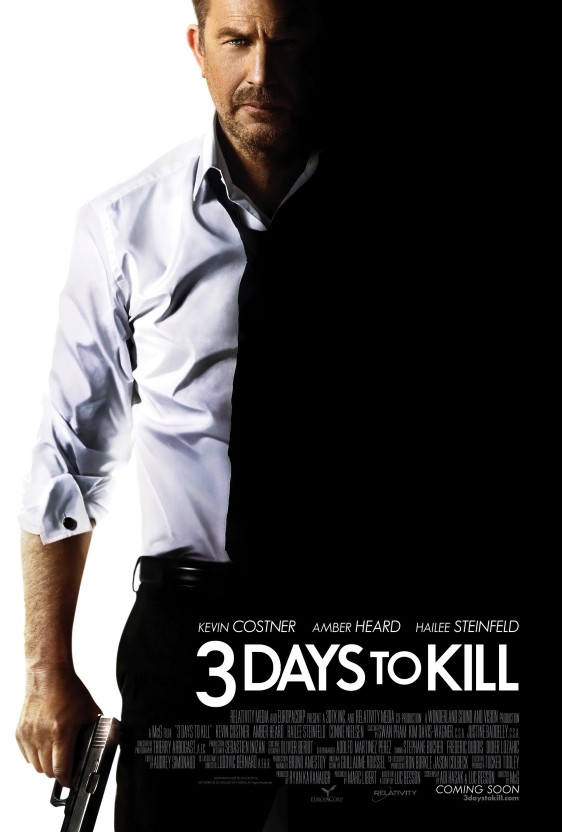 This week on the podcast, Glenn and Daniel bear witness to Luc Besson’s latest take on “An Aging American Action Star in Paris”, featuring Kevin Costner in 3 Days to Kill.

Spoiler alert: We’re not shy about our disdain for this film, and we are a bit more lax than usual about concealing plot details.

Listen above, or download: 3 Days to Kill (right-click, save as, or click/tap to play on a non-flash browser)

Editor’s note: This screening featured the US edition of the film, dubbed in English.

The first act of Hiyao Miyazaki‘s The Wind Rises, allegedly the director’s final film before retirement, contains many jarring transitions between childhood dream and reality. The young Jiro (voice of Zach Callison) dreams of becoming an aeronautical engineer at the dawn of aviation itself. Certainly, the technology would soon see its first use in global warfare, but at the dawn of the 20th century, it remained the stuff of fantasy and legend. The first airplane that we see is Jiro’s confabulation of something halfway between a World War II Japanese Zero and the split feathers and slowly flapping wings of an eagle or hawk. It is a gorgeous, mighty, preposterous thing – and young Jiro can’t stand the notion that his Harry-Potter-worthy spectacles will prevent him from ever being able to fly one himself. This fantasy is presided over by Italian aerial pioneer Giovanni Caproni (Stanley Tucci), or at least a magical caricature thereof, who is happy to stroll up and down the wings of his ridiculous six-winged creations, or jump off to a running stop in mid-flight.

These dream sequences are exhilarating, to be sure, but the transitions between dream and story were often accompanied by jarring shifts in tone and a lack of clear separation, to the point when adult Jiro (Joseph Gordon-Levitt) is caught in a monstrous earthquake and fire while traveling on a train to university, it is not immediately clear whether the towering, apocalyptic inferno that scorches the sky and countryside is real, or another imagined construct. But it quickly becomes clear that this is a very real event.

From this point on, what we’re seeing is a heavily fictionalized biopic of Dr. Jiro Horikoshi, the eventual designer of the Mitsubishi A6M Zero, a high-speed fighter that would be the scourge of the Pacific campaign during World War II, widely regarded as one of the finest pieces of aeronautical engineering ever produced for its time. But this Jiro is not the architect of a weapon of war; he’s just madly in love with airplanes. 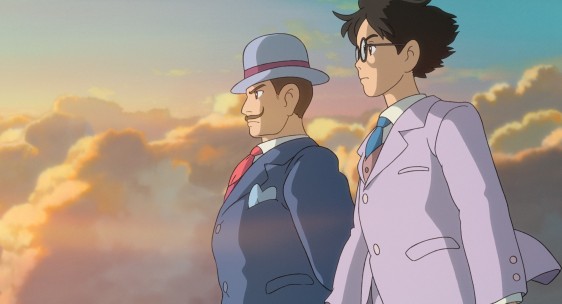 The film broaches this theme quite explicitly in the imagined conversations between Jiro and Caproni. The Italian begins by telling Jiro that airplanes are not weapons of war, and that he dreams of eventually using them to ferry passengers and unite the world through travel. At this point, the audience is free to reject this sentiment as wildly absurd and disingenuous, as both Jiro and Caproni’s employment is at the behest of their governments, who were on the eve of engaging in expansionist warfare. And yet, even with the benefit of hindsight, The Wind Rises succeeds as a highly personal and humanized take on the age-old science fiction theme of whether an inventor is ultimately responsible for what his dream and invention might be used for. Aviation can unite mankind, or empower its capacity for mutual destruction. Nuclear energy can power a city, or destroy one. Many of our most valued technologies would not exist if not for their invention in the service of war. But this is really only the beginning of the film’s treatment of this theme.

The characters – both Jiro himself – tasked with building fighter planes, and his friend and colleague Honjo (Jon Krasinski), tasked with designing heavy bombers – seem quite aware that their inventions will be put to destructive use. But they just can’t help themselves. They collaborate and share ideas. They consume and improve upon technology with a ravenous passion. And the film essentially glorifies this drive to innovation. If The Wind Rises has a technological thesis, it is that invention is morally neutral at worst, and glorious at best, regardless of its eventual purpose.

In another imagined conversation, Caproni eventually asks Jiro if he would rather live in a world with or without pyramids. This is a curious question. Pyramids could be regarded as a one of the great, wondrous achievements of mankind – echoing their greatness with their endurance through the ages. Or they could be regarded as a monument to squandered resources and lives for no greater purpose. Much like warfare itself. It can be for glory and progress, but it will be for death and destruction. The Wind Rises is clearly in the former camp – air travel is a great wonder of mankind, and the film depicts each grand aerial vehicle as a larger-than-life, incredible machine – even some of the confabulated terrors from Jiro’s early dreams (including a massive zeppelin dropping vaguely human-shaped bombs) are impressively depicted. Jiro sets out to build a sleek and speedy fighter, and he tests it initially without a single gun, bomb, or bullet on board. If he has any nationalism within him, it is absent in this depiction. He just wants to build a beautiful plane. It is a fascinating theme – and one that the film explores with impressive depth, despite its rather perfunctory treatment of the ensuing war. 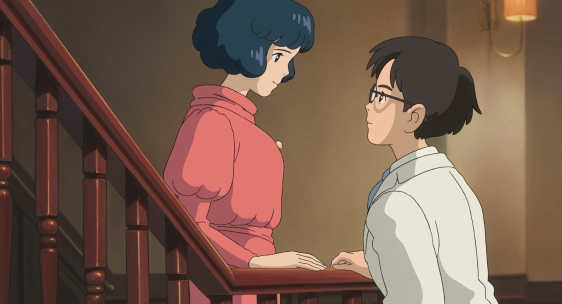 In fact, Jiro experiences two sad and beautiful love stories – the first with his planes, and the second with his long-time love, Naoko (Emily Blunt). After meeting at a young age during the earthquake, the two carry on a lengthy courtship that eventually blossoms into an enduring romance. This relationship is really only given time to breathe in its later years, but it conveys some remarkably tender moments between the two. This relationship, like that of Jiro and Honjo, is depicted mostly from Jiro’s own perspective. Naoko is offscreen for the majority of the film, and yet, as the story advances through the years, the couple’s history convincingly hangs over their every interaction. And while this love story exists as a separate force and feeling from Jiro’s own drive toward designing the perfect plane, the two romances often mingle in interesting ways. A late scene depicts Jiro working at his drawing desk while Naoko rests on the floor beside him. He operates his slide rule with one hand while tenderly clutching Naoko’s outstretched palm with the other. It is a sweet moment, and one of many for this pair.

Once the film gets into Jiro’s story, it really finds its footing – but this is after a very rough first act in which it quotes a French poem so many times that it begins to lose all meaning both as the source of the film’s title, and as its explicitly stated theme. Le vent se lève, il faut tenter de vivre. The wind is rising, we must try to live. This poem is broad enough that it could be taken to endorse basically any position. But given that it is followed by the aforementioned earthquake and inferno, its application in the film seems clear and deliberate. Chaos, death, and destruction will ensue no matter what you do, and the best you can do is to live your life and try your best to do something valuable. But try not to think too hard about how you might be contributing to that first thing. I don’t wish to belabor this point, but the film invites this sort of introspection by essentially glossing over both the ultimate fates of several characters, as well as the entirety of World War II. It screeches to a halt and fast-forwards to the end of the war, and we see another charred countryside, identical to the one from earlier in the film (and evocative, perhaps deliberately, of another Studio Ghibli film, Grave of the Fireflies). And perhaps that’s what it all added up to in the end. The first conflagration was the accidental product of a natural disaster. The second was a deliberate invention of mankind. Another great and wondrous thing, crafted for the ages.

Ultimately, despite its bumps, The Wind Rises is a mature and thoughtful tale. It offers a treatment of scientific progress as a pure and desirable dream, even if it is sometimes driven by impure or destructive motives. The dreamers won’t be around forever – but their dreams live on, one way or another. 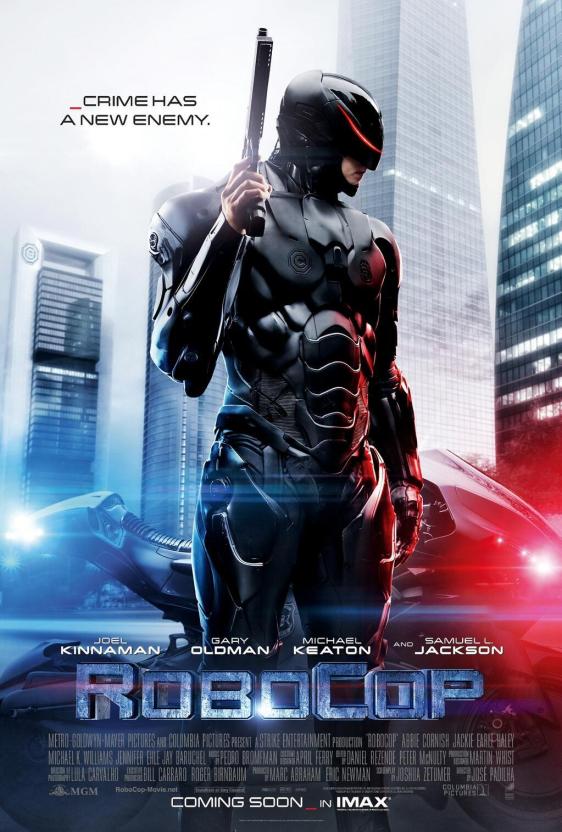 This week on the podcast, Glenn and Daniel are pleasantly surprised by another unnecessary remake of a 1980s film that manages to be a little bit more than the sum of its parts.

Listen above, or download: RoboCop (right-click, save as, or click/tap to play on a non-flash browser) 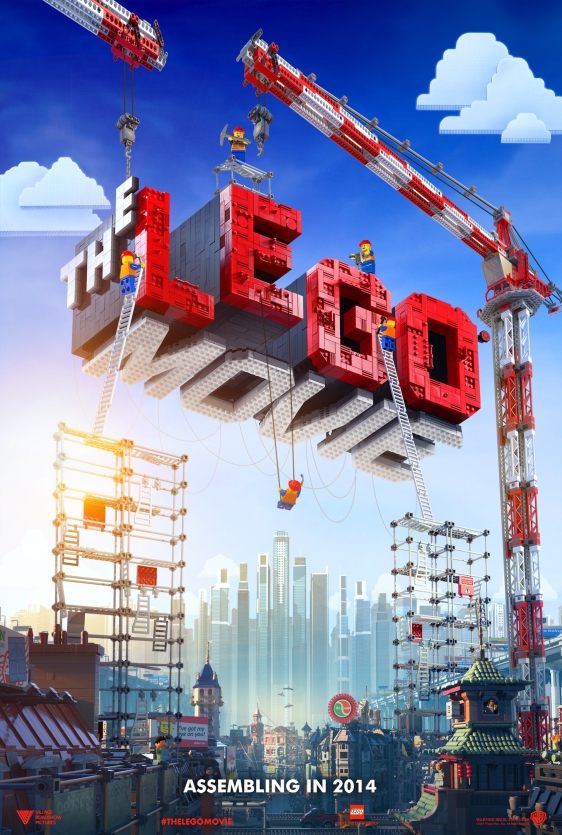 This week on the podcast, Glenn and Daniel tackle the latest piece of zany versatility from Phil Lord and Christopher Miller, The Lego Movie.

Listen above, or download: The Lego Movie (right-click, save as, or click/tap to play on a non-flash browser)

This week on the podcast, Glenn and Daniel dive into Labor Day, a surprising genre exercise from beloved director Jason Reitman, featuring Kate Winslet as a single mother who is taken hostage by – and finds herself falling for – an escaped convict named Frank Josh Brolin. Can a talented cast and filmmakers elevate a premise that seems, on the surface, to be the fodder of Nicholas Sparks novels?

We thought so – and we promise we’re not damning with faint praise. Check out our discussion below (42:32).

Listen above, or download: Labor Day (right-click, save as, or click/tap to play on a non-flash browser)