I have to imagine that a day on the set with Roland Emmerich is just endless exhortation that the world is exploding around you, it’s real, and you need to give a damn. When I compare his signature destruction to that of Michael Bay or Zach Snyder, the salient ingredient is always that Emmerich chooses to view it through the small eyes of people in small-scale, interchangeable stories who noticeably care about what’s happening, and also about each other. They’re also preternaturally lucky and can travel at unimaginable speeds (the movie literally handwaves this aloud at one point), but that’s all fine. These films are always about the luckiest people on the world; otherwise their stories would be rather short.

Independence Day was an unlikely action sci-fi classic that succeeded by taking a recognizable world (our own) and populating it with the casual sci-fi slaughter of a B-movie on a blockbuster budget. Strippers and mad scientists and mind control? You bet. Tentacles? For days. Two-dimensional WWII-style dogfighting and glorious catchphrases? Welcome to Earth, bitch. For a sequel set 20 real-time years later to succeed, it needed to credibly convey that this is a post-invasion world that has been fundamentally and catastrophically changed, à la Pacific Rim or Final Fantasy: The Spirits Within, and I’m pleased to say, Resurgence mostly succeeds at this. It does much of it through ham-fisted expository dialogue (“As you know…”), but by and large, it plays through the film’s mesmerizing visuals and grand conceptual ambitions. Have we rebuilt Washington, D.C., bigger and shinier than before? You better believe it, and a damn moon base to boot. We’ve also replaced all of our planes and helicopters with the aliens’ hovertech, and – in a minor spoken detail – the world is completely free of armed conflict.

Wide-eyed genius cable-guy/scientist David Levinson (Jeff Goldblum) is back, in charge of the UN’s alien-infused Earth Defense. His buddy Captain Steven Hiller, USMC (Will Smith) is not, having been unceremoniously killed test-flying one of the new hi-tech fighter planes between the two films. He is joined by the two kids from the first film, Dylan Hiller (Jessie T. Usher) and former First Daughter Patricia Whitmore (Maika Monroe). I’m inclined to comment on the tragedy of these next-gen fighter pilots being forced to resume fighting their parents’ endless interstellar war, but if I’m being honest, the only real tragedy is that Usher is a charisma vacuum compared to his late cinematic father. Monroe is capable, reviving the same acting chops she used to carry the lead role in It Follows.

Since the younger Hiller offers little in the way of buddy chemistry with anyone in the film, that role is instead filled by Whitmore’s fiancé, pilot and moon-base bad-boy Jake Morrison (Liam Hemsworth), who operates as a sort of unlicensed space cabbie for David, hopping from the Moon to [unspecified plains], Africa, back to the Moon, then back down to Area-51 by way of London, all in about fifteen minutes of screentime. Don’t try to make geographical or logical sense of what I just typed. The key thing is, when London gets senselessly obliterated about seven seconds after reentry, I was waiting for someone to express sadness about it, and David’s French psychiatrist lady friend Catherine (Charlotte Gainsbourg) dutifully obliges, albeit riding the coattails of a pair of pee jokes. This sequence highlights the film’s greatest strengths and weaknesses simultaneously. It has the good sense to include believable character moments and people acting like human beings in the face of unimaginable destruction- but it operates at such a breakneck pace that these moments are very nearly lost in the shuffle. The film never stops to breathe for a moment. David never feels the despair of having spent two decades arming the Earth with defenses that proved utterly outmatched by the aliens’ second salvo, and doesn’t get hopelessly drunk in the Area-51 kitchen. He never thinks for a moment that he’s about to die, and busts out a cigar with a friend before his final moment. The characters in this film feel real pain and pathos as their new world comes to an end, and yet they power through it so quickly that it plays like they already know how the film will end. Granted, the film’s “twist” was a bit obvious, so perhaps even the characters had it worked out. 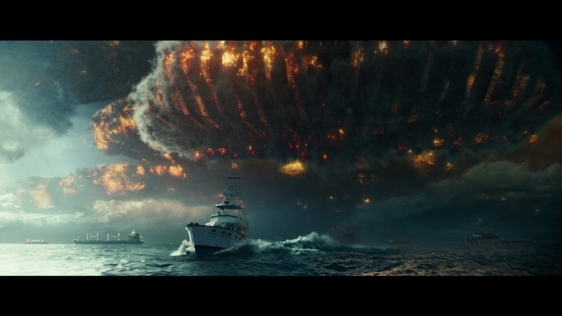 As far as the sci-fi action goes, I must reiterate that the film is visually stunning. Its final set-piece is a macro-scale marvel that is far more impressive than anything in Pacific Rim– it turns out a film gains many points with me by having the confidence to showcase its creations in a static, faraway view in broad daylight. It’s okay, the movie says, we know this looks awesome. And we don’t mind showing it to you. The fighter battles were a bit less interesting this time around, mostly because they succumbed to the temptation to overpopulate the screen with visual junk. But the film wisely avoids trying to perfectly recreate the battle-style of the first film, spending most of its time instead with the sort of high-concept sci-fi craziness that might occur when both sides have access to the same level of technology. The resulting battles are bizarre, but entertaining- and only occasionally incomprehensible.

There are other returning characters I haven’t mentioned. Judd Hirsch is put to appropriately goofy use, and Brent Spiner dials his mad scientist persona up to eleven. Vivica A. Fox has been promoted from stripper to surgeon (in a standard “We don’t know what to do with her so she’s a doctor now” piece of casting) and…probably should’ve stayed home. By and large, as a sequel to the first film and an expansion of the world, Independence Day: Resurgence succeeds. The film’s most potent avatar is former President Thomas J. Whitmore (Bill Pullman), who works best when he is credibly showcasing his scars from the first film, and falls flat when he is trying to recreate actual scenes from it. We don’t need the speech again. Perhaps it’s coincidence that today is the Fourth of July. And we’d best leave it at that and get back to the fight. 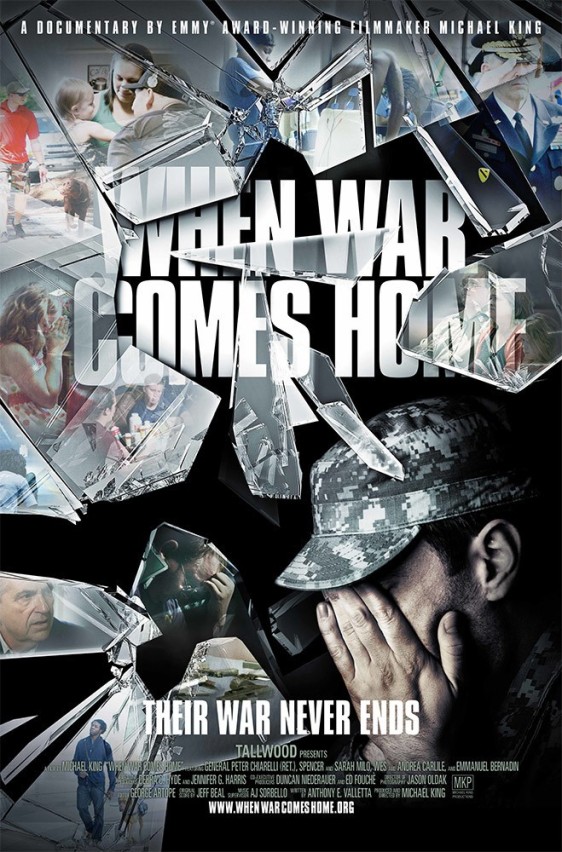 In this week’s podcast, Glenn and Daniel return to the Seattle International Film Festival, first to give a shout-out to the badass women of Angry Indian Goddesses, followed by some fanciful religious absurdity with The Brand New Testament. And then we conclude a trilogy of reviews that we’ve done on warrior subculture in the United States, with a deep dive on When War Comes Home, Emmy-award winning director Michael King‘s new documentary on soldiers living with PTSD and traumatic brain injury. This film divided us, both on what we think a documentary should be, and on the value of compelling human interest stories. Listen to us unpack the film below. (49:26).

Seattle area listeners:
There will be a special Flag Day screening of When War Comes Home at the Majestic Bay Theater, on Tuesday, June 14th, at 7:30PM. It will be followed by a panel discussion with several of the film’s subjects.

For free tickets, RSVP at this link.

Listen above, or download: The Brand New Testament, When War Comes Home (right-click, save as, or click/tap to play on a non-flash browser)