Drew Barrymore’s directorial debut, Whip It (review), was an adept entry in the sporting genre (in this case, roller derby), made even more effective by some impressive casting and rich characters. The great Marcia Gay Harden plays Brooke Cavendar, an overbearing mother who puts constant pressure on her daughter, Bliss (Ellen Page), to stay pretty and compete in events that are equal parts beauty pageant and debutante ball. Bliss, meanwhile, would rather throw elbows and knock out teeth on the derby track. Brooke is an apt parallel to overeager football dads, but Harden’s performance is far more layered than such a stock character would normally require. Even as she steadfastly refuses to consider her Bliss’ wish to continue with roller derby, her concern for her daughter’s wellbeing shines through. She is stubborn, imperfect, but utterly well-meaning, and Harden’s strong performance contributes to making this one of the most engaging relationships in the film. 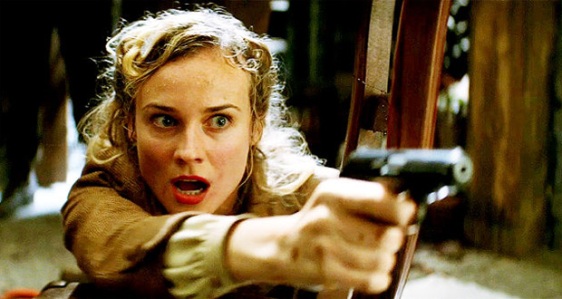 As I said in my review, I’m seldom disappointed by actresses playing actresses, and German actress Diane Kruger was no exception. As she knocks back champagne and disarms an entire tavern of soldiers with a single laugh or smile, she harkens back to a time in which celebrity meant something altogether different for an actress from what it means today. And as her true role becomes apparent, she portrays her fictitious vintage film-starlet-cum-saboteur with exactly the right blend of elegance and ruthlessness.

Japanese actress Rinko Kikuchi first came onto my radar with her fantastic performance as a deaf student (and nearly the only interesting character) in Alejandro González Iñárritu’s 2006 film Babel. She returns in Rian Johnson’s The Brothers Bloom as another less-than-verbose character… We are told that the brothers’ sidekick and demolitions expert, Bang Bang, speaks about three words of English, and indeed, this is about all we hear from her during the film. Nonetheless, Kikuchi’s brilliance at physical comedy and remarkable range of facial expressions make her one of the most memorable and hilarious characters in the film. If there’s one thing Javier Bardem showed in No Country for Old Men, it’s that a character with very little dialogue can still be quite compelling. With her performance in this film, Kikuchi has proven this true once again, and further proven that such a character doesn’t have to be a daunting psychopath. 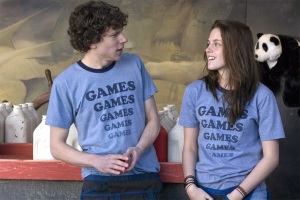 Kristen Stewart is either a brilliant actress or a one-time fluke. Here’s what I had to say about her eight months ago when I first saw Adventureland:

As much as it pains me following my experience with the abominable Twilight film, the moment has finally come when I must admit… Kristen Stewart is a damn fine actress. I can only speak to my reaction, but during every moment of Emily’s screen time, I was on the edge of my seat with anticipation. Stewart, in an incredibly nuanced and visual performance, managed to convey such a compelling sense of desperation and longing in every scene (both with and without [Jesse] Eisenberg) that I spent the entire film simultaneously rooting for and pitying her.

As Dave Chen from /Film points out, there is a “massive gulf between her on-screen charisma, and her off-screen persona”. Since Adventureland, all I’ve really seen from Stewart is a considerable foray into celebrity, and an understandable, if unremarkable return to her principal moneymaker. At this point, I must reserve judgment on whether she’ll prove a strong actress after she has left the Twilight franchise behind… Nonetheless, this is one of the most brilliant performances I’ve seen this year, and I have absolutely no qualms about praising it.

“Just think of me as yourself, but with a vagina,” says Alex to Ryan (George Clooney), with whom she has just shared a casual hotel fling. In my original review, I said that it is only with the character of Alex that the film comes dangerously close to contrivance. She is almost a total mystery – we know that she lives a similar life to Ryan, spending much of her time flying around the country, but we don’t really know much else. And yet, Farmiga’s performance and chemistry with Clooney completely make this romance work. While we don’t learn much about her profession, we do learn a great deal about her as a person. This character is somewhat of a mirror, acting as both a female version of Ryan and an older version of his colleague Natalie (Anna Kendrick). But in her interactions with the two, she offers some remarkable insights. One of my favorite scenes in the film involves Alex and Natalie swapping their respective versions of the ideal man. Farmiga’s monologue in this scene is just fantastic. Even as she is saying some pretty provocative things (e.g. “Please, let him earn more money than I do”), her delivery includes all the hesitation and reflection that comes with such a deeply personal question as one’s ideal match. On the surface, this scene simply highlights the difference in perspective between women in their 20s and 30s, but it also provides a mountain of subtext for the film’s central romance between Alex and Ryan that gives the film immeasurable rewatch value.

Click here to see the rest of the 2009 Glennies.