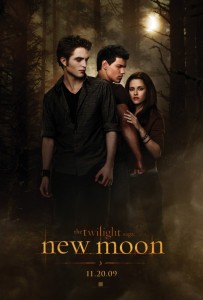 Kristen Stewart returns to the screen as Bella Swan, a teenage girl passionately in love with the vampire Edward Cullen (Robert Pattinson). Ordinarily, I would begin with a more in-depth plot description, but that’s really all you need to know. In fact, that’s basically all that happened in the first Twilight film, minus a brief diversion of vampire baseball.

In point of fact, I would love to start this review with an impassioned screed against Stephanie Meyer’s puerile prose and hackneyed attempts at supernatural mythology… How she wouldn’t know a vampire if he strutted his hot, sparkling body up and bit her… How she’s taken the framework of an innocuous teenage love story and turned it into a ham-fisted allegory for Mormon sexual abstinence… How her quixotic creation, Edward Cullen, the overbearing and overprotective centenarian in the body of a 17-year-old has been inexplicably and irresponsibly cast as the ideal boyfriend for millions of impressionable teenage girls – as well as masturbatory fodder for their bored, cradle-robbing mothers…

I would love to say all of this. But I can’t, for two reasons. The first is that most of it is overreaching, hyperbolic nonsense. Teenagers aren’t well-known for their adherence to heavy-handed abstinence allegories, and their penchant for worrisome role models is only surpassed by their speedy disinterest in yesterday’s cheesy fad (which might explain how quickly Summit is cranking these films out). As for supernatural mythology, I don’t care any more about Meyer’s version of a vampire than I do about Tolkien’s version of an elf. She is certainly not the first offender when it comes to flouting the traditional rules. While I’m happy to criticize her vampires for their inconsistency and sparkling skin, I do so because these things are stupid, not apocryphal.

But the main reason I can’t go off on New Moon for any of the above points is that it didn’t really provoke such a reaction from me. It didn’t inspire much of any reaction, in fact. It was just a bland diversion, peppered with gratuitously half-naked adolescent boys.

On the surface, it is noticeably superior to the first Twilight film. For a start, there’s some semblance of a plot. Bella and Edward start off by talking at length in English lit class about the various ways in which they resemble Romeo and Juliet, and how they would go about killing themselves if they were ever separated. This seems rather irresponsible in a film marketed to brooding teens, but I’ll go with it. For you see, the vampires of this world are so strong, they’re incapable of even killing themselves. This rule is a bit too much like God creating a rock so big that He is incapable of lifting it for my taste, but I can also accept this, since it only leaves one [thoroughly entertaining] method of suicide at Edward’s disposal – being literally ripped limb from limb by three other vampires.

The superficial nods to Romeo and Juliet continue, as Edward is banishèd from the film a few minutes later. When Bella gets a blood-drawing paper cut at her birthday party and is nearly attacked by one of Edward’s vamp brothers, he resolves to move away and never return. Following the loss of her undead lover, Bella goes variably between a spat of faux-self-destructive teenage angst and a bit of shameless, “I like you as a friend” pursuit of her werewolf buddy Jacob Black (Taylor Lautner). True to form, Bella spends nearly half of the film failing to realize her friend’s furry little secret…
But when a bit of well-deserved werewolf jealousy and a series of nonsensical miscommunications lead Edward to believe that Bella has died, he does the prudent thing, and heads to Italy to provoke the vampire royalty into executing him. Given that Robert Pattinson’s acting hasn’t improved much from his abysmal turn in the first film, I was rather hoping Edward would succeed in this endeavor, but alas, it wasn’t meant to be.

Director Chris Weitz has previously proven his visual chops in his terribly adapted but pretty-looking 2007 film, The Golden Compass, and he has brought some much-improved filmmaking to this series. Unfortunately, any effective visual storytelling in New Moon is constantly undermined by the characters themselves. The opening scene is a gorgeous dream sequence in which Bella sees an elderly woman walking through an alpine meadow. Edward, the perpetual teen, strolls across and lovingly greets the woman, and Bella quickly realizes that she’s looking at her future self. This was one of several impressively shot sequences in the film, and brilliantly introduced Bella’s anxiety about aging past her boyfriend’s perpetual youth. But like every other theme in this film, it goes on to be explicitly spelled out about a dozen more times, which ultimately undermines it. Even as Bella pretends to make the choice of becoming a vampire so she can stay young with Edward forever, it is constantly being made for her by various characters as the film goes on.

In spite of the dubious character work, there is a bit of decent acting on display. Kristen Stewart can scarcely do wrong in my eyes after her wonderful performance in Adventureland earlier this year, and she brings back most of her charisma for this film. However, there are several moments in which she reads her lines so woodenly it sounds like she can hardly believe what she’s saying. I couldn’t help but chuckle when Bella breathily suggested that the group go see a movie (with the hilarious title of “Face Punch”), because it contains, “Action, adrenaline…woo! That’s supposed to be my thing now…”

It’s okay, Kristen. I didn’t believe it either. 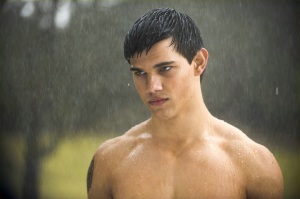 Taylor Lautner, on the other hand, did a fantastic job. Call me crazy (or a pederast), but I have to say I’m on “Team Jacob”, at least when it comes to acting talent. Lautner is helped along somewhat by Meyer’s genuinely interesting take on werewolves – they’re basically pack-hunter versions of The Incredible Hulk – but I have to hand it to this kid. He spends most of his screentime showing off his chiseled abs and ‘roided biceps, and that’s basically all he needed to do for the target audience. Nonetheless, he delivers every one of his ridiculous lines with the gravitas intended on the page. I’d say he was hamming it up, but he just comes off as completely earnest.

I’m not sure how to conclude this review, since I don’t really have any strong opinions about this film. If I were to take it remotely seriously, it would be offensive on a number of levels, but it’s mostly just mindless pap for the teenage masses. Every interesting or provocative plot point either gets reversed by the end of the film or hammered into the ground. There’s a love triangle, but not really… Bella becomes an adrenaline junkie, but not really… The star-crossed lovers are separated forever… But not really. A girl is forced to make a serious, life-altering choice… But not really. If nothing else, the story demonstrates Stephanie Meyer’s tenuous relationship with tragedy – her characters constantly embrace it, but shy away from any real consequences, and the storytelling is happy to let them get away with it.

The Twilight saga may have broken me. I might have to forgo the next film and wait for David Cronenberg’s gory exploitation version of Breaking Dawn (*fingers crossed*) (contains NSFW language).