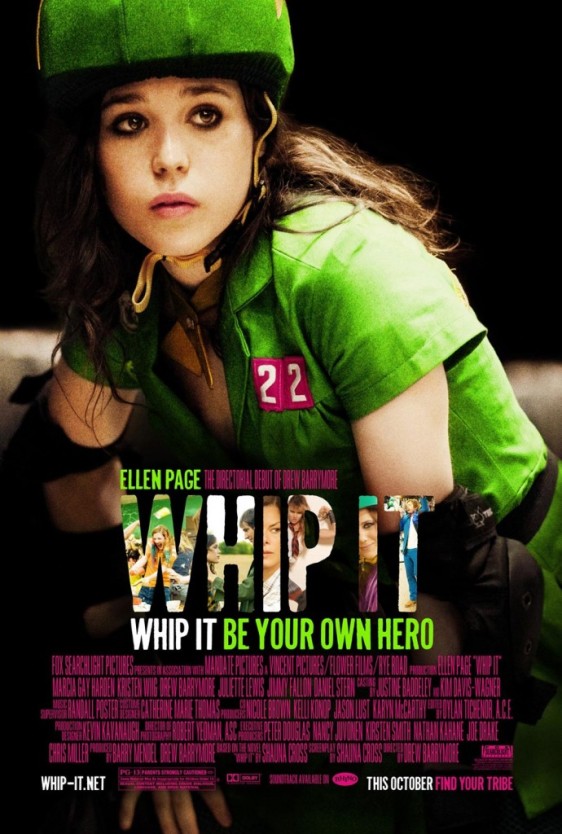 Drew Barrymore’s directorial debut, Whip It, is the story of Bliss (Ellen Page), a 17-year-old girl who takes a shine to roller derby – the sport in which ladies both lovely and terrifying skate around a banked oval track throwing elbows and attempting to collapse each other’s lungs while passing their opponents’ crumpled bodies to score points. The title refers to a technique whereby one or two skaters act as an anchor to in order to “whip” a teammate past them – a slingshot maneuver designed to greatly increase the teammate’s speed around the track. When I saw this and similar maneuvers put forth in the later matches of the film, I couldn’t help but think of the “Flying V” of The Mighty Ducks. Indeed, Whip It ends up falling somewhere between a Disney sports film and a Texas football tale, and even without the other story trappings, it would be an admirable entry in the sporting genre.

Bliss’ mother Brooke (Marcia Gay Harden) puts constant pressure on her daughter to stay pretty and compete in events that are equal parts beauty pageant and debutante ball, and is naturally appalled to find out what her daughter is doing with her spare time. The parallels to overeager Texas football dads aren’t exactly subtle, but this subplot worked well for me, owing largely to Page and Harden’s performances, as well as that of Daniel Stern as Bliss’ father.

When confessing her secret sporting life to her parents, Bliss proclaims, “I am in love with this!”. This line was in the trailer, and Page delivered it with such earnestness that it was almost solely responsible for my interest in this film. The story of a teenager in love who doesn’t need to wallow in brooding, misunderstood angst was strangely appealing to me, and Page’s performance delivered on every bit of promise from this line.

And yet, Bliss is not an unrealistic or idealized teen. She acts bratty and selfish at times, and is ultimately put in her place a bit for it. She partakes in a romance with a local guitarist, for no clear reason other than because he’s (omg) super-hot. This storyline initially seems pointless, but pays off rather well in the end, and treats us to a bizarre, but entertaining underwater makeout scene.

The supporting cast is solid, with great performances from Alia Shawkat (“Arrested Development”), Zoe Bell (the Kiwi stuntwoman from Death Proof), Andrew Wilson (Idiocracy), and Kristen Wiig (“SNL”) – who proves her acting chops even without her signature comedic deadpan. The great Juliette Lewis is also effective as a rival derby player.

The only real weak link in the acting – with the exception of Jimmy Fallon as an absolutely repellent announcer – is director Drew Barrymore. I was conflicted about her presence as an actress in this film; at times, it seems self-indulgent. Barrymore plays a member of the derby team – basically a non-character, lacking any defining characteristics beyond her nom de guerre (Smashley Simpson). I can’t comment much on her performance, since she doesn’t really do much acting, but she does bring the same convincing physicality to the derby sequences as the ladies above (granted, I have no idea how many of the stunts were actually done by the actresses). There’s seems to be no reason for her to be in this film except to join the fun, but I can’t fault her too much for it.

As a freshman filmmaker, Barrymore’s direction is not mindblowing, but she has done a fine job. Cinematographer Robert Yeoman brings the same sort of semi-grainy look that he’s used in every one of Wes Anderson‘s films, but it works fine here. The camera starts off tight and claustrophobic – focusing on a one or two players at a time, intermixed with POV shots (seemingly from a camera on skates), but as the film goes on, the shots get wider, and we see more and more. The direction kept the action coherent, built the matches’ interest as the film went on, and brought an adequate measure of intimacy and earnestness to the character moments.

The empowering message of “Be Your Own Hero” is ever-present, but not overwrought. If there’s one message the film conveys best, it’s that roller derby looks brutal and immensely fun, and it’s wrapped in enough solid character work to make this a memorable film. 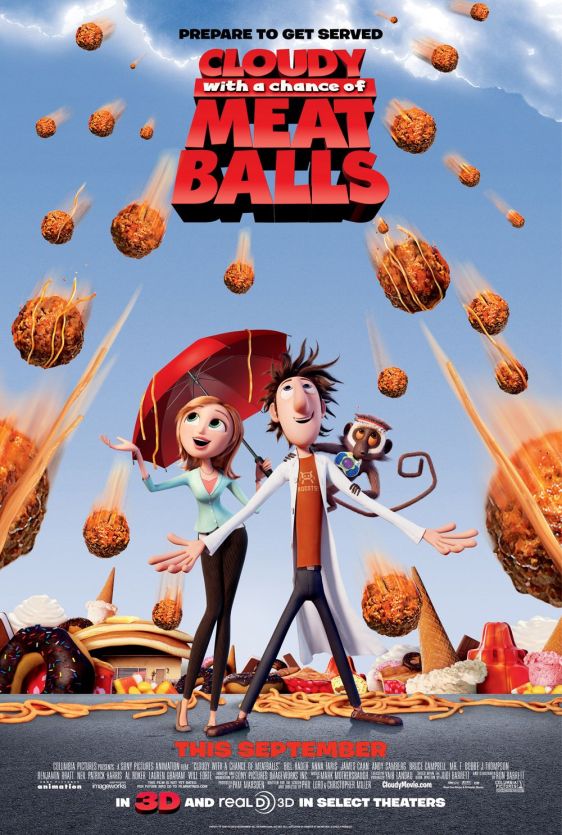 Every once in a while, a film comes along that challenges Pixar’s well-earned dominance of the animation market. A film with a solid story, compelling characters, and gorgeous animation. Last year, it was about a panda that wants to learn kung fu. This year, it’s about a scientist who builds a machine that turns rain…into food.

Flint Lockwood (Bill Hader) is a crackpot inventor who has built a myriad of bizarre inventions since childhood, from spray-on shoes to a monkey thought translator. His latest invention is a machine that can “mutate the genetic formula of water to turn it into food”. And that’s about as detailed as the science gets in this film. Lockwood’s lab is designed very much in the Calvin and Hobbes aesthetic, complete with a set of blast doors painted onto a curtain. And just like Calvin, all of the science he develops is immensely fun and borderline magical.

Lockwood lives on a drab island town in the North Atlantic called Swallow Falls, which had previously survived solely on its sardine industry. This industry collapsed when it was discovered – and announced in newspapers the world over – that “Sardines Are Super Gross”. While the town makes an ill-conceived attempt to revitalize through “sardine tourism”, Lockwood’s invention accidentally blasts into the sky (as crackpot inventions are wont to do), and he discovers that it can be programmed remotely to make the skies rain down any food the townspeople want like manna from heaven.

Also in the mix is the power (and food) hungry mayor (Bruce Campbell), a beautiful weather intern (Anna Faris), Lockwood’s disapproving father (James Caan), an aging former sardine mascot (Andy Samberg), and an alarmingly speedy cop (Mr. T). The casting is one of the film’s greatest strengths. Sony appears to have learned a lesson from Dreamworks’ failures. You can’t just pack a film with movie stars and expect them to do well as voice actors. These actors (even Mr. T) feel very much at home in their parts.

As for the character design, it seems quite deliberately cartoonish. Flint Lockwood looks more or less like Jon Arbuckle, with a nose easily half the size of his head. His father’s eyes aren’t even visible under a huge bushy brow and above an equally monstrous mustache, and Mr. T’s cop sports an inverted mohawk (a line shaved down the center). This is in stark contrast to the rest of the animation, which looks gorgeous and practically photorealistic. The film takes place in a sort of heightened reality, and yet the island of Swallow Falls feels every bit like a real place, from its initial shroud of gloomy gray mist to its eventual golden glow amid a shower of falling cheeseburgers. The weather and atmospheric effects are incredible, and the food looks delicious.

The film could have stopped there, but it goes on to showcase some remarkable visual wonders and absurdities. There are depictions of food and food-related wonder and peril that I never could’ve imagined before this film. What does a sunrise look like through the shimmering golden walls of a palace made of jello? How do the children play in a town covered in giant scoops of ice cream? What does it look like when huge animate gummy bears hop onto the wing of a plane and start ripping out wires like a pack of gremlins? I could go on. By the end of this film, you will know all of this, and more.

The film is written for the screen and directed by Phil Lord and Chris Miller, two of the writers of CBS’ brilliantly funny sitcom, “How I Met Your Mother”, and this film has many similarities to that show. In addition to the rapid-fire jokes delivered throughout the film, it also showcases several well-conceived running gags, each of which has a hilarious payoff by the end. It also balances the humor, which is unrelenting and hilarious, with some solid character work. There’s Sam Sparks, the weather girl, afraid to show how smart she really is, and ‘Baby’ Brent, the former sardine mascot, unsure of what to do with his life in adulthood…

There is also a very well-conceived relationship between Flint Lockwood and his father. Tim Lockwood is a simple fisherman, afraid of new technology, who can only communicate meaningfully with his son in the form of fish-related metaphors. As Flint unveils his fantastical machine to the townspeople, this relationship becomes imbued with subtle shades of the creative destruction wrought by new technology on old industry. The relationship keeps these shades while confronting one of the most basic questions between father and son: Is Tim proud or appalled by what Flint has accomplished?

It is largely through this relationship that the film tackles the implications and consequences of a society steeped in overconsumption, but it keeps this to a very basic level. This treatment of the film’s message seemed well-suited for such a lighthearted romp of a film, but it may feel to some like a missed opportunity. To such individuals, I would simply say this: not every film needs to be WALL-E. This film deftly acknowledges the implications of its grand premise, and then leaves its audience to ponder them further if they desire. This, along with the myriad of smart running gags, will ensure that this film rewards repeat viewings. This is a gorgeous, intelligent, and family-friendly piece of animation, sure to be enjoyed by adults and children alike. It respects its audience and will leave them begging for more.

Special thanks to Devindra Hardawar from the /Filmcast for recommending this film, which I would probably have overlooked otherwise.

4 thoughts on “Week in Brief: “Whip It”, “Cloudy With a Chance of Meatballs””