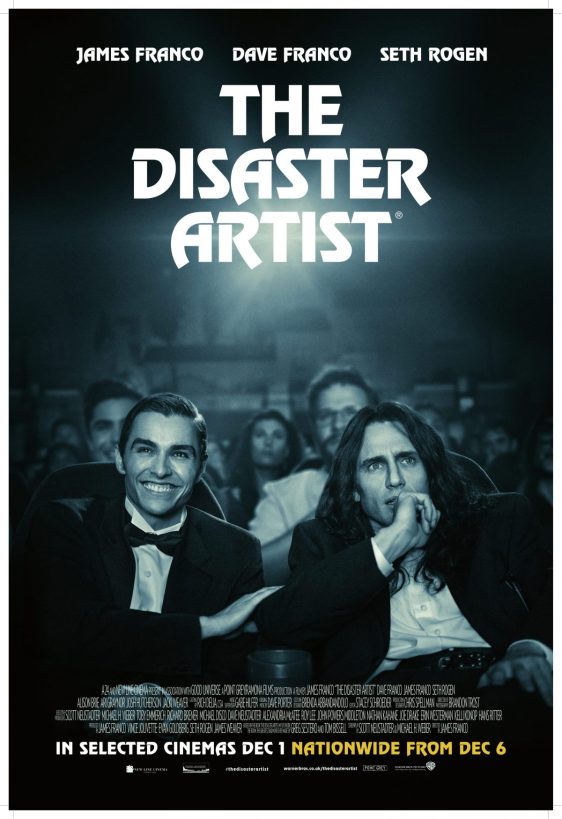 For someone whose birthdate, nationality, and endless source of funds are an enduring mystery to this day, Tommy Wiseau, the writer, director, producer, and star of the 2003 self-financed film The Room strikes me as essentially guileless. What you see is what you get. And what you get is…quite strange. From his pallor to his dyed, jet-black hair to his uneasy laughter in an ineffable accent, Wiseau is a living cartoon vampire whose most enduring mark on the world has been to make his very best impression of a Hollywood film, which ticks every box that he thinks a film needs to tick. Johnny (Wiseau) is a young bank manager who seems to have it all. Great friends like Mark (Greg Sestero), a great girl like Lisa (Juliette Danielle), a great betrayal when the two start sleeping together behind his back, and a series of additional random high-stakes subplots that are introduced and dropped without further ado. This is pure melodrama, and I must emphasize that what makes this film work so well is that – with the singular exception of Mike Holmes, who mugs horribly at the camera about his “underwears” – all of these actors are playing this horrendous and overwrought material completely straight. When criminal Chris-R (Dan Janjigian) threatens wayward, youthful creep Denny (Philip Haldiman) at gunpoint in a dispute over missing drug money (on a rooftop for some reason), they play it as straight as day players on Law and Order hoping to put together a convincing highlight reel. When Claudette (Carolyn Minnott) pauses a monologue about a real estate dispute with her brother with a surprise announcement that she has breast cancer, you feel it as surely as daytime TV. And you continue to feel it when the credits roll, along with a nagging realization that these events are never resolved or discussed again in any way. The Room is a bizarre, meandering film, and its saving grace is a lead and script whose ineptitude is only matched by its sincerity.

So what do we make of this film, in which young actor Greg Sestero (Dave Franco) becomes friends with Tommy Wiseau (James Franco), and – in the act of writing the book that inspired this film – repeatedly violates Wiseau’s oft-spoken admonition not to discuss him behind his back? Is this a memoir, or a polemic? Is it a tribute, or a betrayal? After I watched the film’s trailer, which consisted of repeated attempts to film a wonderfully bizarre rooftop scene, I went in with a question in mind: who exactly is this movie for? Would this be a mere celebration of Hollywood and filmmaking, like The Artist or Hugo or [literally hundreds of other films]? Or is it an exhibition of nostalgia, intended purely for superfans of The Room? I’m thinking here of something akin to Cary Elwes’ memoir, As You Wish, which consists of 273 pages of saccharine anecdotes from the set of The Princess Bride (including the time he and the entire cast got the giggles from André the Giant cutting a thunderous fart during a scene that they had to play seriously) – less a cutting exposé, and more a parallel novel with a likely dollop of fan-fiction, neither offering any grand insights on the filmmaking process, nor particularly sullying the nostalgic glow that surrounds a beloved film. Something nice, but thoroughly inessential. The answer I came up with is that it pretends to be the former, but it is definitively the latter. This is an indulgence akin to Ed Wood, a thoroughly entertaining film which holds little appeal without prior familiarity with the featured director. It ends with a completely unnecessary credits sequence of side-by-side comparisons between Wiseau’s film and Franco’s recreations, which we’ve already seen throughout the film. I didn’t need this, but I wanted it. Make no mistake, I was delighted by this film, but it is fundamentally a parasitic – or perhaps symbiotic – work that feels less like a meal and more like a bowl of miniature Kit Kats.

The early scenes between the brothers Franco – attending acting classes, acting out a scene in a diner, discussing their frustrated dreams of the silver screen – are easily the film’s strongest. Wiseau’s bizarre antics are nearly indistinguishable from those of his character Johnny, and the elder Franco’s performance, as well as his burgeoning friendship with the younger Franco’s Sestero, is simply outstanding. It is this friendship that forms the sole emotional core of the film that is not nostalgia-driven, and it largely works throughout the film, as do both performances. The only time that James Franco’s performance crosses over into imitative, SNL territory is during the recreated scenes from The Room, where he is no longer playing a character, but rather, trying his very best to match the exact cadence and camera-work of Wiseau. This duplicative puppet show plays a bit like a pair of Highlights for Children pictures where I’m invited to spot the differences. James Franco matches the closest, but some of the others are eerily spot-on as well. Dave Franco’s version of Sestero is such a close, and yet slightly wrong match for the actor that he looks like a mo-capped video game cutscene – uncanny valley territory. That weirdness is less of a problem with the other actor-characters, such as Juliette Danielle/”Lisa”, Philip Haldiman/”Denny”, and Dan Janjigian/”Chris-R”, played by Ari Graynor, Josh Hutcherson, and Zac Efron respectively. The 2017 actors are nearly unrecognizable in their wigs, and have much less to do in the film, and as such, they don’t seem to feel quite so much pressure to be carbon copies of their 2003 counterparts. Efron-as-Janjigian-as-Chris-R (still with me?) is a particularly delightful psychopath. 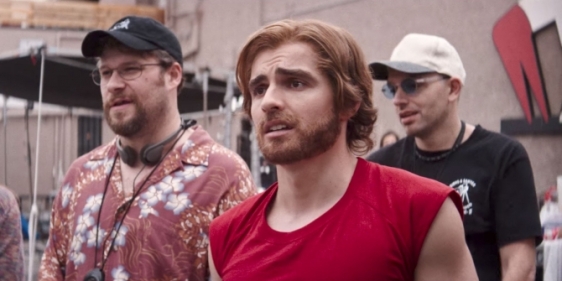 Carolyn Minnott/”Claudette” (Jacki Weaver), who has just passed out due to a lack of air conditioning or water during a particularly hot and egotistical day on set, makes a trite observation that the worst day on a film set is still better than the best day anywhere else. This may well be an authentic quote, but it’s also the closest that the film comes to acknowledging that “magic of Hollywood” fluff from the other films I mentioned. And there’s perhaps a bit of intended irony here, because Wiseau is certainly depicted as abusing these actors a bit. Hitchcock abusing Tippi Hedrin, this is not – although that relationship does get a shout-out in the film – but there’s definitely a minor, timely depiction of actors (particularly female actors) being sacrificed on the altar of their director’s ego. The conflict comes to a head as Wiseau is about to film a bizarre and overlong sex scene with Danielle, and he struts around naked (wearing only the standard-issue Hollywood dick-sock), defending the need to show his ass in the film (“to sell movie!”), and screaming that Danielle’s body looks disgusting (because he spots a bit of acne that will probably not be visible to the side-by-side film and HD cameras). DP Raphael Smadja (Paul Scheer) engages in a bit of masculine bravado, threatening that Wiseau is “a dead man” if he should ever disrespect Danielle again. Smadja is fired, then not fired, Sestero tries to calm his friend down, and Danielle – consummate professional, or perhaps just afraid of getting fired herself – says repeatedly, “I’m fine – can we just do the scene, please?” This scene was a monkey-fight at the zoo, and honestly, I have no idea if I believe it went down this way or not. This is about as unlikable as the character Wiseau ever gets in the film, and while it has a lasting impact on his relationship with Sestero, I honestly found it too shallow a conflict to really affect my image of Wiseau as an earnest and mostly amiable weirdo. Much of the conflict with Sestero stems from a “best bud vs. girlfriend” dynamic featuring Dave Franco’s real-life wife Alison Brie in an utterly insubstantial role, and despite how well the Franco brothers play this friendship, none of this felt like it mattered all that much. James Franco can get into multiple shouting matches with every guest-starring comedian in this film, and all the while, I’m just thinking, Franco – and Wiseau – are the bosses of their respective sets. They are the money, they make all of the decisions, and we’ll get a movie out of this no matter what. We don’t spend enough time with any of the other characters to know or care about their feelings on the situation, and there’s fundamentally very little at stake here. In retrospect, my judgment of Wiseau as guileless starts to feel more like a cop-out, designed to avoid admitting that I learned very little of substance about the man from a film that is supposed to be his biopic.

Perhaps I’m asking too much here. I took two full weeks to write this review, partially because of a Thanksgiving vacation, and partially because I was unsure if it’s okay to enjoy an indulgent, pandering film if I’m the one that’s being pandered to so effectively. The film ends with Wiseau at his premiere, Sestero back as his reluctant friend, and the audience giving a biopic-standard round of applause for the film and its subject (perhaps not for the reasons he intended), and of course, my real-life audience did the same. Wiseau drives past the premiere twice in a limousine full of an excessive amount of The Room swag (the very same swag was in the theater with us as well) – his ideal red carpet premiere containing a generous sidewalk crowd, as one more box that his film needs to check. And in the end, I’m happy to acknowledge that any love I experienced for this film is inextricably tied to my love of The Room – love that I at least believe that Franco shares on some level. If The Disaster Artist feels like anything, it’s a sequel and spiritual successor, and perhaps that’s enough. And as the credits roll, and I watch the two films side-by-side like the post-modern, tech-addicted weirdo that I am, my inexorable conclusion is: Fuck it, let’s indulge.

Hi doggie! You’re my favorite customer. I did NAHT.

One thought on “James Franco’s “The Disaster Artist” – Let’s indulge.”