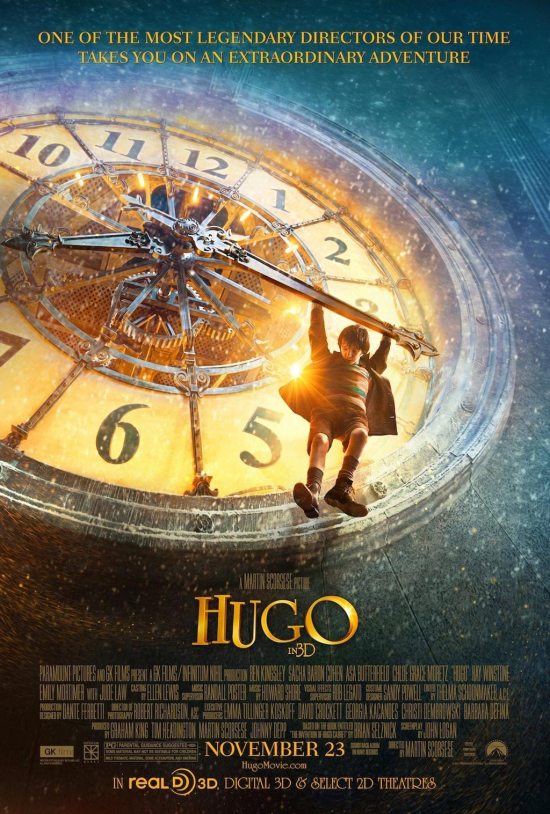 Martin Scorsese’s Hugo is a delightful family film and an outright visual treat, but it is definitely trying to be two distinct types of film. The antagonism between the orphaned, precocious tinkerer Hugo Cabret (Asa Butterfield) and the unforgiving (and unnamed) 1930s Paris train station inspector (Sacha Baron Cohen) is surely the zaniest plotline in the film – and yet, like every interaction here, it is checkered with a surprising depth of emotion. Nearly everyone in this film has a bit of a tortured past, but some of their harrowing backstories are downplayed to such a degree as to be unintentionally hilarious. When Hugo’s erstwhile father (Jude Law) is incinerated in an unmotivated blaze of CG fire, there was audible laughter in my audience… And when the station inspector’s leg-brace (a source of his ample bitterness) gets caught on the outside door of a departing train, I assumed he would meet a similarly horrific offscreen fate, but it was not to be.

The film begins with a masterful sequence of silent-cinema world-building (easily the strongest since WALL-E), then jumps right into this rather jarring combination of tones. But despite my initial qualms, I quickly found myself entranced by it. The film’s strongest relationship, which it establishes with remarkable speed, is between Hugo and Isabelle (Chloë Grace Moretz). Isabelle is bookish and adventurous, and fits right into that Hermione Granger zone of “probably should be annoying, but isn’t.” Moretz’ performance is nothing short of brilliant, lighting up the screen with enthusiasm everytime she makes an appearance. Asa Butterfield, a relative newcomer, is adept as Hugo Cabret, but the character himself is not nearly as fascinating as those surrounding him, and his relationship with Isabelle owes far more to Moretz’ performance than anything else. This young actress is just starting to demonstrate her versatility (starting with such films as Kick-Ass and Let Me In), and is certainly a talent to watch out for in the next few years.

The film’s locale – a 1930s Paris train station – is also a rich character, particularly with the film’s luxurious 3D visuals to support it. Hugo lives on the fringes, climbing through the walls, rafters, and numerous clocks of the station, stealing what he can to support (and feed) himself. He also strives to repair a mysterious clockwork man (“automaton”) – a museum castoff that his father acquired before he died, and promised his son he would repair. When enigmatic toy vendor Papa Georges (Ben Kingsley) simultaneously catches Hugo thieving and discovers his secret mechanical project, he turns immediately hostile, vowing to burn Hugo’s notebook and have him arrested if he sees him again. It is at this point that Hugo and Isabelle embark on their adventure – to find out why Georges (Isabelle’s godfather) is so miserable in his old age. Kingsley’s performance is marvelous, delivering just the right blend of sadness and intrigue. This is a bitter and ancient soul, but his bitterness is richly layered enough to suggest that it is the product of having lived too much rather than too little. This is a man who had everything and lost it; not a man who regrets what he failed to achieve. 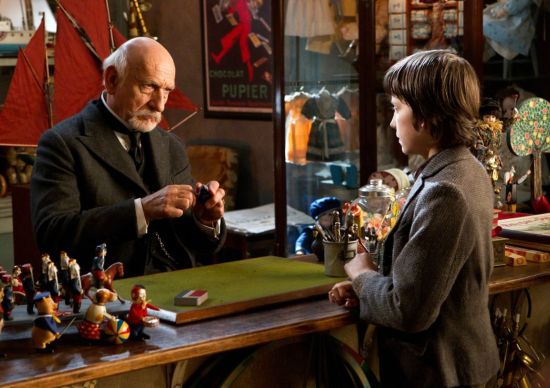 Much of the second half relies on flashbacks, and without getting into too many specifics, Hugo is the latest of several films (along with The Artist and My Week With Marilyn) to turn a nostalgic eye toward filmmaking techniques of old. Of those films, this one certainly goes back the furthest, presenting some truly innovative in-camera stop motion and lighting effects. With this sequence, Scorsese affectionately showcases the earliest days of film production, when a film studio was a glass warehouse full of sets and costumes blanketed in natural light. Along with the train station’s many clocks and gears and levers – which are strongly evocative of silent films such as Modern Times, this entire production feels like Martin Scorsese’s love letter to prototypical filmmaking.

Hugo’s conception of the world is as a wondrous machine full of mutually dependent and wholly necessary components- human and otherwise. For this conception to have survived even as he is relegated to the fringes of society is a fascinating theme, even if it gets stated aloud a few too many times during the film. Even as Hugo and Isabelle learn the dangers involved in dredging up the past, they seem as much in pursuit of their own purpose in life, and it’s all profoundly affecting. Even if not every moment rings perfectly true, the performances more than make up for it (a scene in which Papa Georges appears as the children examine an artifact from his past felt a little too pat, but Kingsley’s performance and ensuing monologue completely sold the moment). The supporting cast is strong, from Helen McCrory and Christopher Lee right down to Sacha Baren Cohen, who succeeds despite his rather thankless role.

Hugo strives to be both a children’s adventure film and a poignant drama about the burden of a forgotten artist, and it largely succeeds as both. What’s more, for any auteurists out there, it certainly feels like a personal project for Martin Scorsese, whose marvelous body of work is fortunate enough to exist in a century with both the technology and inclination to preserve it. No one quite knows how their creative efforts might be remembered in future generations, but this film deftly argues that such efforts ought to be remembered and cherished. What truly makes this is a great family film is not just the zany and inoffensive hijinks that it shares with so many other blockbusters, but also this message, subtly woven throughout a story that is quite worth telling.

A note on 3D: The film boasts some stunning visual design, although I must say, seeing it in Dolby 3D (high-tech stereoscopic, basically) gave me a bit of a headache, and had far too many on-screen artifacts and reflections to avoid being a distraction. But this is certainly not the fault of the film, whose 3D is easily the best I’ve seen this year. As much as I hate to be a brand partisan, you’d do well to catch it in RealD 3D screening if you can.