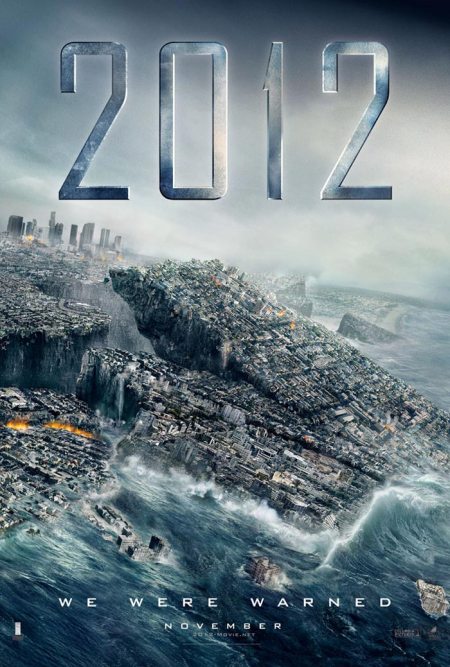 Roland Emmerich’s 2012 may well and truly cement its director as a one-trick pony. It’s as if he wanted all the global-scale disaster of The Day After Tomorrow (and then some), but to be even less restrained by minor scientific trifles. Indeed, if there’s one word that aptly describes this film, it’s “unrestrained”. Just as Transformers 2 was a $200-million-dollar channeling of an 8-year-old Michael Bay playing with his toys, this film is Emmerich tramping through the sandbox, wreaking unimaginable havoc upon the other children. He is his own Godzilla. He is rage. He is bile. He is become death, the destroyer of worlds.

This film absolutely revels in destruction, and yet successfully strikes the tone of a light-hearted adventurous romp. It also features a truly remarkable character. Jackson Curtis (John Cusack) is a struggling divorcé sci-fi writer-cum-limo-driver. Nothing special about him whatsoever. And yet, as the film goes on, his true role is revealed. He knows exactly the right people. He gets all the right information. He is always in the right place at the right time. He can drive a limousine with a missing door through the plate-glass of a collapsing building as his un-seatbelted family holds on for dear life, and make it to the airport to take off in a fully fueled plane, seconds before the runway is swallowed into hellish oblivion – not once, but twice*… And he always comes back for more.

The film gives us little doubt about who this man is. He is the Luckiest Man in the World.

I’m sure other versions of him come to mind. Jack Bauer, John McClane, James Bond… We’ve seen characters with absurdly persistent luck before, but it’s usually shrugged off as a combination of training, enemy ineptitude, and contrived invincibility. What makes 2012 so remarkable is that it may offer the most convincing explanation yet for this character. It’s the end of the world. And naturally, there will be a smattering of survivors. A few scientists, rich people, AND the Luckiest Man in the World. The film could easily have focused on one of the many barely seen individuals whose unceremonious slaughter makes up the beautifully rendered CG backdrop through which our heroes must cavort, or one of the additional billions who die off-screen, not fortunate enough to meet their end in front of a famous landmark or city skyline… But let’s be honest, who really wants to see that movie?

Whether deliberately or inadvertently, Roland Emmerich has seized upon one of the fundamental truths of large-scale disaster. The bigger the disaster, the harder it is for us to fathom the loss of life in any meaningful way, and with the fictional – and frankly silly – apocalypse on display here, it’s hardly worth trying. So instead, as with Emmerich’s previous films, 2012 focuses on a plethora of characters, many of whom are one-dimensional and serve no other purpose besides cannon fodder, and yet he succeeds far more often than he should at making us genuinely care about them. One scene, in which an old man calls his estranged son to make amends – a setup that absolutely begs for a schmaltzy goodbye – nearly shocked me to tears with its actual ending.

The performances were adequate for the subject matter, but there were a few standouts. Chiwetel Ejiofor and Oliver Platt are two government officials – fairly one-note representations of Compassion and Pragmatism respectively – but they do an admirable job with their limited material. Woody Harrelson is absolutely hilarious as an Art Bell sort of radio host. Zlatko Buric gives an adept performance as Yuri Karpov, a retired Russian boxer and billionaire. Karpov is a fascinating, albeit slightly uneven character, and he gives a provocative (but straight-forward) justification when discussing the ethics of buying himself a seat on mankind’s only chance of salvation. He gazes mournfully across at his wife and children, and asks Curtis, “If you were rich like me, what would you have done?”

Indeed, the ethics of self-preservation are a central question in this film… We see a meeting of the leaders of the G8 – the richest countries in the world – who come up with a plan to build a series of Arks to save a small percentage of the population. Amusingly, the manufacture of the Arks is outsourced to China, but for a very good reason – the scientists have somehow [correctly] predicted that a megatsunami will cover the Himalayas with Emmerich’s signature non-receding ocean water.

At this point, I must mention, the bad science in 2012 did take me out of the film once or twice. Most of it strays just far enough from reality to provide exciting and implausibly narrow escapes for our heroes, but there were a few truly egregious offenses, most of them tsunami-related. Bad science also provided the fuel for a horribly contrived end sequence – I won’t spoil the details, but suffice to say, it goes on far too long and was entirely unnecessary. I would recommend you not think too hard about the ending of this film, but Emmerich’s planned followup TV series, “2013”, may force me to revise that position.

This is the most thoroughly the world has ever been destroyed on film (with the possible exception of Titan A.E.), and the visuals certainly seem to emphasize quantity over quality in a few scenes. Nonetheless, they are mostly brilliant – one scene, depicting the eruption of a supervolcano, featured perfect visuals and near-perfect drama. But for most of its run, 2012 is just a huge, ridiculous ride. It’s more of the same from Emmerich, but if you’ve enjoyed any of his earlier disasters (as I have), it’s well worth a look.

*A gimmick the filmmaker is clearly fond of.

Bonus: Check out this amazingly recut trailer for “2012: It’s a Disaster!” from Garrison Dean of io9.com: