As an American, I found two unfamiliar things at work in Healing. The first is the character of prison guard Matt Perry, played by Hugo Weaving. This is the first non-elven character I’ve seen Weaving play that could be called “nice,” and the first of any kind with his native Aussie accent. The second is an unfamiliar narrative – that of the “nice prison film”. The film takes place at an Aussie minimum security prison that’s also a working outback farm (although it’s unclear what, if anything, is grown or raised there). Not only is it low-security, but it’s apparently designed to prepare inmates for release and reintroduction into society. We learn that inmates must have had a spotless behavioral record for four years at harsher facilities to qualify, and that any missteps can get them sent right back. The Brown Mile, if you will.

But this film isn’t interested in the harsh realities of the Aussie prison system, such as they might be. Instead, it features a variety of inmates whose crimes range all the way up to manslaughter and murder, and the committed guards and social workers who are clearly interested in helping them adjust to their impending freedom. I haven’t even reached the on-the-nose metaphor of raptor rehabilitation that’s at the center of this film, and already, it seems like an incredibly rosy picture of prison life. But then, the only comparison I can make is to other prison films (and MSNBC exposés), which (at least in the US) seem committed to delivering an entertaining and lurid level of menace and violence. This picture of prison life as a torturous crucible which only prepares criminals for further criminality is the only version that seems credible, even if the only data I have to back it up is the occasional well-publicized abuse. Healing made me realize one inescapable truth – prison movies tend to be depressing. And there’s certainly room in cinema for an upbeat prison story, even if, as Red might say, prison is no fairy-tale world.

The film centers around Viktor Khadem (Don Hany), an Iranian man in prison for a murder 16 years prior. When Perry leads Viktor’s work detail out to the fenceline, they come across an injured wedge-tailed eagle that has become entangled in the barbed wire – apparently a common occurrence. When the local bird sanctuary is unable to help, Perry puts the inmates to work building a makeshift aviary, and assigns each of them a wounded bird to look after. Naturally, Viktor is assigned the eagle, whom he names Yasmine. Indeed, each of the inmates ends up being assigned a bird that is a remarkable match for their personality – the stoic and solitary Viktor gets the eagle, a more skittish inmate receives a shy owl, and so forth.

This all sounds very neat and tidy, and that’s because it is. I had to fight my cynicism at every step of the way initially, before it became clear that the film was aware that not all of these inmates can be “fixed” so neatly. One inmate is targeted for mistreatment by his fellow inmates because he was convicted of the accidental (drug-induced) killing of his own child – at least, we hear that’s what’s happening to him, even if we never see much of it onscreen. Another of the inmates, Warren (Anthony Hayes), is clearly running a jailhouse criminal enterprise of some sort. And he’s really the least believable part of the film. The guards are clearly aware of his malfeasance and do very little to stop it, leaving the character seemingly only present to provoke unwarranted conflict. Given how easily the character is dispensed with in the third act, he could easily have been cut from the film entirely. The resulting film would be just as progressive and slight, but wouldn’t spend nearly as much time on a narrative dead-end.

Hany’s performance is stellar as Viktor proceeds to rehabilitate Yasmine – a powerful raptor seemingly named after his late wife, who died while he was in prison. He also delivers some serviceable emotional moments as he attempts to salvage his relationship with his son, although these scenes feel a bit rushed relative to their intended weight. Weaving makes for a stern, but forgiving authority figure, dealing with similar issues of loss and regret to many of the inmates, even if his issues remain vague and take a backseat to those in his charge. Xavier Samuel and Mark Leonard Winter add some interesting depth to the supporting inmates, even if we know rather little about them. Every bit of praise I have for this film comes with strings attached, and when it comes down to it, this film does feel a bit like a progressive after-school special. It’s extremely slight, but it’s also just…very nice. The outback scenery and raptors look gorgeous, and the film dabbles in a few headier issues than its simple and optimistic premise would require.

At the end of the day, gaze upon the cloying image in the poster above, and accept that what you see is exactly what you get with this film. If you can bring yourself to be inspired by it, you’ll do fine. 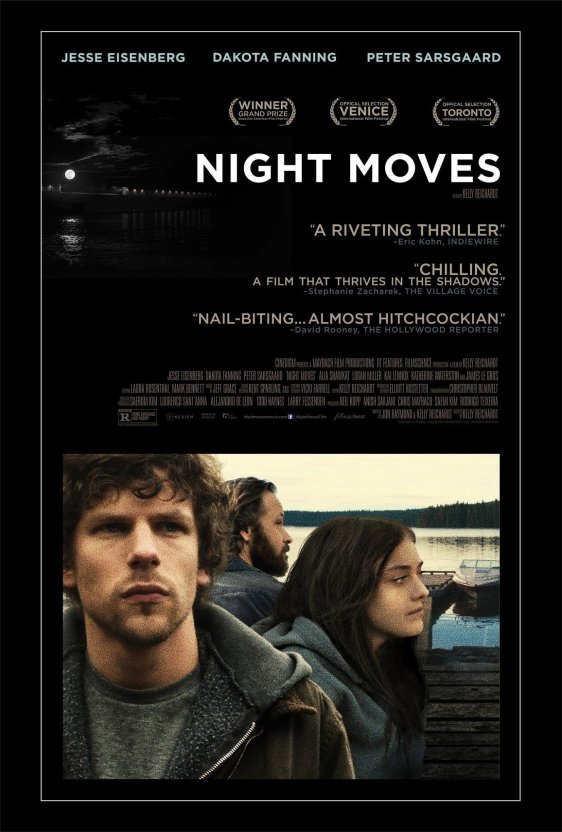 Night Moves – a film centering around an environmental extremist plot to blow up an Oregon dam – is a marvelous and understated thriller, so in the interests of preserving suspense, this review will be light on plot details. The film centers around a couple (who may or may not be romantically involved?), Josh (Jesse Eisenberg) and Dena (Dakota Fanning), who team up with an ex-Marine, Harmon (Peter Sarsgaard) to assist with their explosive plot. Much of the suspense revolves Reichardt’s meticulous depiction of the actual process – how they plan to physically build a bomb and transport it to the site without getting caught. Gone are the days of Fight Club obfuscating bomb recipes in order to protect the public – this film could easily function as a how-to guide for crafting a compact fertilizer bomb, even if it makes it clear that the substances required are controlled for bulk purchase.

In fact, it is this detail that leads to one of the film’s finest scenes, in which Dena is sent into a farm and feed store, under the auspices of an unassuming local farm girl, to purchase what should rightfully be regarded as a suspicious quantity of ammonium nitrate. Dakota Fanning is unquestionably the MVP of this trio, portraying Dena as an idealistic rich girl who seems quite capable of the extreme actions she’s pursuing, but is ultimately just reveling in the process without really considering the consequences. And as the full scope and implications of the plan become clear during the course of the film, Fanning plays Dena’s gradual breakdown in a remarkably understated manner. Never overplaying it, but never underestimating the psychological toll that such a plan would take upon a person. Eisenberg and Sarsgaard are also strong, but we certainly end up knowing the least about them overall. The audience is forced to infer much of their character from their actions and reactions over the course of the film – always showing, but never telling.

In his memoir, retired FBI profiler John Douglas once related a conversation he had about his work (classifying serial killers). He was asked if, knowing all that he knew about offenders and law enforcement, could he get away with murder? His answer, after a brief pause to consider all of the implications, was no. His “post-offense behavior” would certainly give him away. This is a tense film, and its tension continues even as the third act obfuscates any sense of where the plot might be headed. Some viewers might consider this third of the film to be a bit meandering, and while there were certainly moments where I felt this way, the film’s thought-provoking ending certainly justified its ambiguous diversions. It’s impossible to know exactly how you’ll behave following an act of criminality that is unprecedented in your life. And really, that’s what makes this final act interesting. The characters no longer have a plan. They’re just reacting to what they’ve become.