The One-Reel Film Festival is part of Seattle’s renowned Bumbershoot music and arts festival. I attended on Saturday and Sunday (this time with press credentials, so no will call delays like last year!), and had the opportunity to see short films from all over the world, ranging from brilliant to bafflingly terrible, some of which can be viewed online (I’ve included links below where applicable). The films were arranged into blocks of around an hour apiece, which I’ve arranged in presentation order below. Bold text means I enjoyed the film, and an asterisk (*) means it was my favorite film of that block. Skip to the bottom for a list of all the films that can be viewed online.

A note on NSFW… Suffice to say, I saw a lot of films this weekend. The ones that I specifically remember containing adult content, I’ve marked as Not Safe For Work. However, outside of the “Films4Families” block, I can’t guarantee that the others will be entirely appropriate. Viewer discretion is advised.

So says and embodies Duffy Bishop, a little-known Seattle blues singer with an intensely powerful voice and a brilliant eye for performing. My shameful admission is this: I preferred this film to Kevin simply because I enjoyed the musician’s performances far more. The director, Brian Johnston, informed us at the screening that this film was made for $150, via equipment and students borrowed from Ballard High School. But even absent this information, the film is still fairly impressive on a technical level. It relies heavily on a smattering of archival concert footage, and despite the highly variable quality of the image, the sound came through remarkably well, and conveyed all the richness and power of Duffy’s performances that could possibly shine through without seeing and hearing them in person. It’s not only clear that Duffy has a towering vocal presence, but she is also an enthusiastic stage performer, shimmying through the audience with a wireless mic and unabashed enthusiasm. The rest of the film is an exploration of the elusive nature of widespread fame, via interviews and phone calls to record stores around the world to see if they have any Duffy Bishop CDs in stock (this venture doesn’t go well). The editing between the interviews and concert footage is tight, overlapping the performance soundtracks nicely whenever appropriate, without letting them wear out their welcome.

If there’s one criticism I can raise about this film, it’s that it feels like a relic of the pre-MySpace era. While phoning record stores around the world is an amusing stunt, it doesn’t feel nearly as effective when I consider that I haven’t purchased an album in a record store in ages. I would have liked to see this film address the questions of digital distribution. If a 27-year-old pulp vampire romance writer can make millions on the Kindle Marketplace, surely the parameters of fame have shifted a bit. A quick perusal of Amazon shows five Duffy albums for sale and in stock, with 4/5 available as MP3 downloads. Duffy’s own website lists them for sale as well.

But you know what? My first inclination leaving this film was to run right out and buy a Duffy album – so if the true message of this film is “Duffy Bishop is an amazing musician”, then it conveyed it quite nicely. More info and featurette.

The 48 Hour Film Project has a simple premise – write, shoot, edit, and score a movie in two days. To ensure that filmmakers are complying with the timeframe, they are given certain common elements to include in their films. For this year’s Seattle 48HFP, the elements were a paint can, a character (a wedding planner named Stephen/Stephanie), and a line of dialogue (“When are you gonna get it together?”), as well as a genre (different for each film). 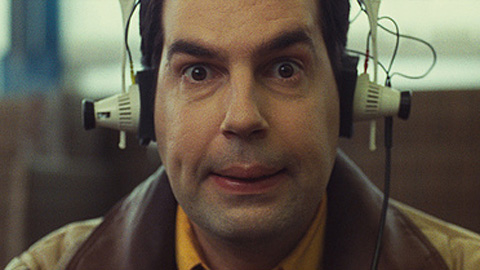 The visual style of this BAFTA-award-winning film is colorless stop-motion animation, using materials made of paper, plaster, and/or styrofoam – like nothing I’ve ever seen before. Our narrator begins as a fetus in the womb, and proceeds to walk us through his entire life, family, and career as a naturalist, as well as his evolving perceptions of time. If time is perceived as a fraction of your total lifespan, he explains, that’s why a moment seems much longer when you’re a child than when you’re an adult. This film spells out its high-minded point by way of a sardonic voiceover narration- something that could have seemed didactic and annoying – but it did so with a brilliant, sharp wit. Trailer and official site here.

From director Ondi Timoner (We Live In Public) comes a documentary about unclaimed “cremains” (cremated ashes) of deceased patients from Oregon State Hospital (formerly Oregon State Insane Asylum). This film attempts to raise some points regarding the conditions of the mentally ill, but really only succeeds in saying that things used to be pretty bad. The only present-day patients we see are in clean, vibrant, brightly-lit surroundings, and are the fresh recipients of a brand new $500 million facility, courtesy of the State Legislature.

The film spends far too much time talking about the “terrible” conditions of these ash canisters. These carefully catalogued and differentiated canisters. These canisters which were sealed and stored using the best methods available at the time. These canisters which were only damaged when the area was hit with a natural disaster. Frankly, given the number of unmarked and mass graves that have existed throughout history, I’d say these unclaimed ashes were in remarkably good condition. The film attempts to attribute metallurgical decay to spiritual turbulence [read: angry ghosts] rather than time and unintended moisture, but the only real “villain” it manages to latch onto is the families who haven’t claimed these ashes – the families who almost certainly don’t know they exist.

I’m not entirely sure why this film was made. It definitely has a point to make, but I found it utterly self-deluding and unconvincing. Yes, it’s sad to be forgotten. But it’s the fate that awaits us all. Rather than obsess about our own mortality and legacy, it’s better to make the world a nicer place for the ones who are still here. And by the time this film was made, this had already occurred for the mentally ill of Oregon. More info and trailer here.