In our podcast review of Divergent, co-host Daniel commented that Shailene Woodley could probably play a high school girl forever. For that particular film, neither of us meant this as a compliment. Following her fascinating but nonetheless sidelined role in The Spectacular Now, I was quite curious to see what Woodley would make of a solo lead in a film that is equal parts stylized mystery and erotic bildungsroman. White Bird in a Blizzard is adapted from a novel (by author Laura Kasischke), and as is often the case with such things, it relies heavily on voiceover, and occasionally gets a bit too far up its own ass with literary metaphors. But that’s the last dismissive thing I’ll say about this film, because after 10-15 minutes of this, I was completely sold on both Woodley’s casting and on the premise of the film itself.

The film begins with the introduction of Kat Connor (Woodley), whose mother Eve (Eva Green) disappears without a trace. Christopher Meloni plays Kat’s beleagured father Brock, and we learn through flashbacks just how little regard her parents had for each other. The production design during these sequences can best be regarded as a dystopian mash-up of Mad Men and The Stepford Wives. Eve is unsatisfied both domestically and sexually, and Kat (then at age 8, played by Ava Acres) is disturbingly aware of the minutiae of her parents’ sex life, or lack thereof – her mother’s nightly solo trips to bed, unsatisfied, and her father’s none-too-secret locked stash of Hustler mags in the basement. After Eve vanishes (when Kat is 17), the flashbacks spend much less time on her discontented marriage with Brock, and far more time on her relationship with her daughter. Kat’s teenage sexual awakening is fully on display in this film, and the film strikes an interesting balance between her various boundary-prodding dalliances and her mother’s competitive attitude about her youth and beauty. 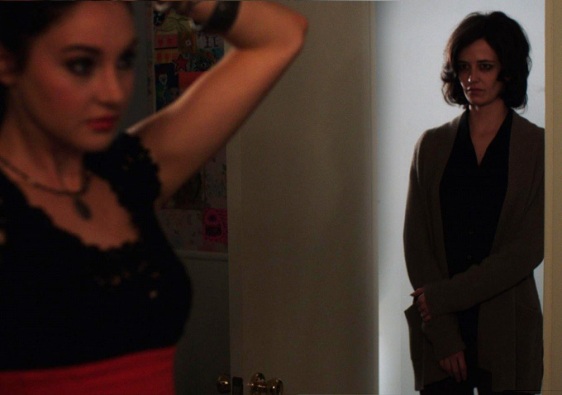 Green is much closer in age to the younger version of the character, and yet seems to sell the middle-aged, despondent version far more through her performance than through any sort of age makeup. As she vamps around the screen – frequently with a glass of wine in hand – she stares creepily at Kat and tells her just how closely she resembles her younger self. This character is Betty Draper in one moment, and channeling the best of Helena Bonham Carter in the next – it’s really quite an impressive balancing act. Given that all of these flashbacks seem to be taking place in Kat’s memory (sometimes literally, as she recounts them to Angela Bassett as her therapist), it’s hard to shake the feeling that Kat is an unreliable narrator. That these are merely her last interactions with her mother as best she can distantly recall them – a bitter recollection of a half-remembered ghost.

Shiloh Fernandez gives a nice turn as Phil, the boy next door (and Kat’s not-too-serious boyfriend). As Kat puts it, he reminds her a great deal of her father – scratch the surface, and you just find more surface. This is perhaps why she meanders elsewhere over the course of the film, seducing 40-something Detective Scieziesciez (Thomas Jane), who is assigned to her mother’s case. The film’s treatment of their erotic interaction is nothing short of masterful. At this point in the film, it’s unclear whether Kat has yet turned 18 (she mentioned previously that she was a few weeks away), and the police detective more than twice her age clearly knows that he’s toeing – and then leaping across – a dubious ethical line. The resulting encounter strikes a frankly miraculous balance – a pair of consenting adults who prod the edges of an improbable power dynamic until they emerge as equals. This becomes one of the most tense and fascinating relationships in the film, and it could never have done so without such a tonally perfect opening scene.

Much like Ellar Coltrane‘s central character in Boyhood, it is a single youth – Kat – whose development is fully on display in this film. And no matter what’s happening in the background, the film only works if we care about this character throughout the film. Woodley is aloof at times, but only when it seems appropriate – when her character can’t be bothered to deal with the chaotic and painful changes in her life. At no point in the film does Kat feel unaffected by either her mother’s disappearance (despite her protestations to the contrary) or any of the linked events, and this makes for a nice, slow-burn mystery as she decides just how much she really wants to know the truth. This film blends mystery into a coming-of-age drama most effectively – and in a way I’ve never seen before. The mystery is ever-present, but impressively restrained to make room for the rest of the cast to get on with their lives.