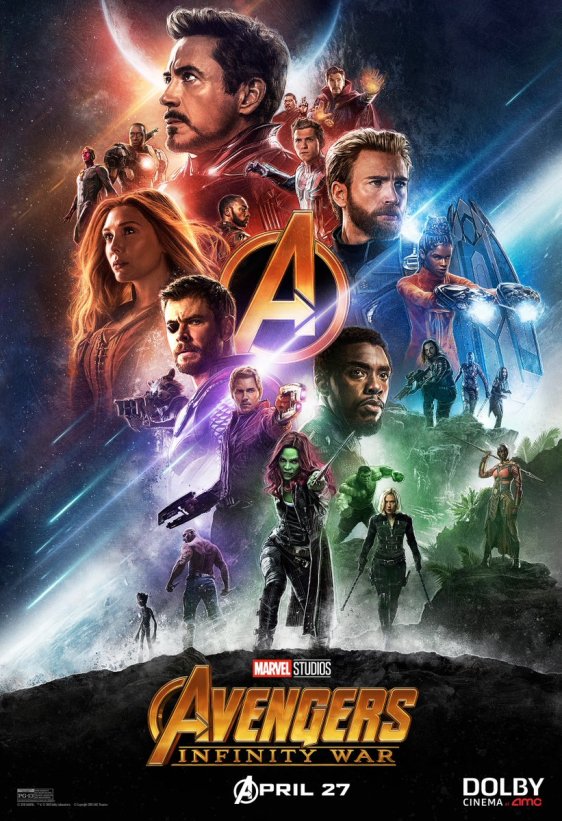 In this week’s podcast, Glenn and Daniel take a spoiler-filled dive into Avengers: Infinity War, the culmination of a decade of superhero films and Daniel-skepticism about them. Will this be the villain and ending that can finally satisfy him? Stay tuned! But first, we check out a new film from writer/director Andrew Niccol (Gattaca, In Time), which may finally answer the question of whether Netflix can take on a sci-fi film from an acclaimed director or franchise for some other reason besides…not being very good (01:04:43).

Listen above, or download: Anon, Avengers: Infinity War (right-click, save as, or click/tap to play on a non-flash browser)

Kevin Smith’s 2003 film Jersey Girl was an adept depiction of the changing relationship between a father and his child after the tragedy of the mother’s untimely death. It was not a perfect film, but it demonstrated some real progress for Smith as a filmmaker, and contained some noteworthy performances. I mention this for two reasons… First, because Ben Affleck and Jennifer Lopez’s previous collaboration ensured that Smith’s film would not be given a fair shake by audiences or critics when it came out (notwithstanding Lopez’s death 15 minutes into the film), and second, because Shine director Scott Hicks has succeeded in crafting an even better take on the same concept.

Loosely adapted from The Independent writer Simon Carr’s autobiography, The Boys Are Back tells the story of Joe Warr (Clive Owen), a sports writer who lives in Australia with his wife Katie (Laura Fraser) and six-year-old son Artie (played by newcomer Nicholas McAnulty). His teenage son, Harry (George MacKay) lives with his ex-wife in England. Following his wife’s sudden death from late-stage cancer, Joe struggles with his grief, his job, and how to comfort and take care of Artie. They are eventually joined by Harry, who comes from England to see his father, seemingly for the first time since he was Artie’s age.

The film excels in its tone and pacing. It deals with some weighty issues, but the story moves right along when it needs to, and never veers too far into somber territory without coming back to show us something genuinely delightful. This variable emotional curve could easily have come off as jarring, bipolar, and seemingly not serious enough for the film’s subject matter, but it manages to avoid these problems.

Much of the film’s bright tone is owed to the gorgeous scenery of Hicks’ native Adelaide, as photographed by cinematographer Greig Fraser. Fraser, incidentally, was a second unit director of photography on Baz Luhrmann’s 2008 film Australia, whose cinematography relied as much on digital arts as on the natural beauty of the continent. This film sticks almost solely to the latter. From the roads winding through the rolling, windswept hills to the grand, sweeping vistas of the South Australian coast, the scenery feels in every way like a love letter to Hicks’ home. And as a backdrop to such an earnest personal narrative, it sets the tone of the film rather well.

The pacing and backdrop of the film are further complimented by Hal Lindes’ breathtaking score. The cardinal sin of a musical score is to be overbearing, vomiting musical flourishes to lend emotion to a scene that is lacking, or step on the emotion that is already there. This score comes very close to that line once or twice in the film, but never crosses it. I found it impossible to suppress a grin during a scene (some of which is in the trailer below) in which Joe drives his SUV down the beach with Artie draped across the hood and windshield, laughing and screaming happily. If the score had relented in its delight long enough to let me fully think through this scene of patent child endangerment, I may well have sided with the myriad of people on the beach screaming that Joe is a lunatic.

Boys will be boys, and a friend of mine is fond of the theory that this is why the population begins skewed slightly male, but starts to even out early on (skewing female by age 40*). Any of my boyhood jaunts across the monstrous boulders of an oceanside jetty or through the branches of an alarmingly tall tree could have rendered me a similar statistic, but this is what fathers do with their sons, and this is one of the things the film captures so well.

Allan Cubitt’s script and Clive Owen’s performance paint a portrait of a father who is deeply devoted to his children, but is nonetheless quite flawed. He left his elder son when he was six, and prior to his wife’s death, he was absorbed in work. His reward is one grief-stricken son that he barely knows how to comfort and another halfway around the world that he barely knows at all. Once both sons are thrust into his exclusive care, he adopts an almost entirely permissive parenting style of “just say yes”, seemingly the product of wishful thinking and a deep desire to protect his kids from further unhappiness. This style works…with variable success, and the two child actors play their parts quite believably.

While figuring out how to be an effective dad, Joe deals with all the other struggles you might expect – relationships with the boys’ grandparents and his ex-wife, a budding romance with a single mother at Artie’s school, the return to his job as a sports writer… All of these issues were handled deftly by the film, with the exception of his job. In a long third act that was already trying to cover a myriad of topics, most of the job-related scenes fell flat and seemed out of place tonally with the rest of the film.

But none of these scenes detracted too much from the film’s great strength, which was its depiction of relationships – between Joe and each of his sons, between the sons as new half-brothers, and between this newly reunited family and the rest of the world. This film dares to ask what hope this new and semi-functional family has of staying together under the circumstances, and manages to thoroughly earn its sanguine message by the end.