Breck Eisner’s The Crazies is the tale of Ogden Marsh, an idyllic Iowa farming community exposed to a biological agent that turns the townspeople turn uncontrollably violent. And I won’t bury the lead on this… It’s one hell of a ride. A deliberate pace, ratcheting sense of doom, and awesome use of setpieces make this an extremely effective horror film. In fact, the last time I had this much fun with a horror remake was with Zack Snyder’s Dawn of the Dead, and from the outset, this film has some stark similarities. It’s another remake of a 70s Romero film featuring another dark Johnny Cash song (in an amusing nod to Dr. Strangelove), and two of the main characters are a cop and a doctor. We get the briefest glimpse at their normal lives, and then all hell breaks loose.

The formula is familiar, but The Crazies does plenty to distinguish itself. Unlike typical zombies, these creatures retain varying degrees of their human intelligence, running the gamut from free-running, flesh-eating monsters to what can only be described as “super-rednecks”. While this makes them only marginally more interesting as characters, it’s still impressive to see zombies put to more substantial use than the nihilistic slaughter fantasy they usually amount to. What’s more, the film takes just enough time to establish an authentic setting and some sympathetic characters with very real stakes. From the outset, Ogden Marsh feels every bit like a real small town, with everyone on a first-name basis with town sheriff David (Timothy Olyphant), his deputy Russell (Joe Anderson), and his wife Judy (Radha Mitchell) – also the town’s doctor. When the military moves in to quell the infection, the plot becomes more like 1995’s Outbreak, but told from the perspective of the townspeople. From the moment the hubristic mayor dismisses the impending threat from what might be the only cornfield swimming pool in Iowa, the film barrels forward and never lets up. The result is a very well-paced chase thriller, told through the eyes of these characters by way of some brilliant but simple setpieces (there’s a sequence in the third act involving a drive-through carwash that I can only describe as pure joy). 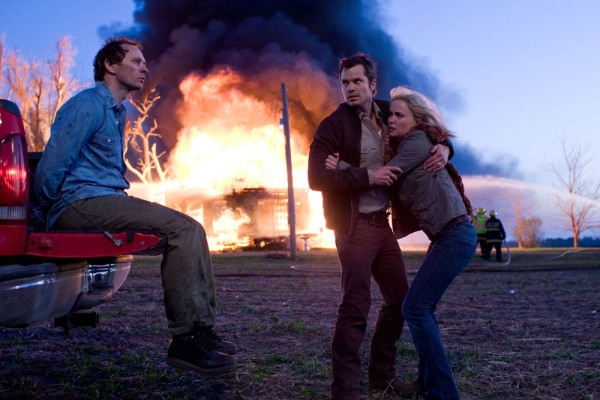 As I think back, the tone of this film seems remarkably well balanced. There are many genuinely terrifying moments, and it adequately conveys the senseless human tragedy of it all while never shying away from a healthy dose of pitch-black humor. As it went on, I found myself genuinely afraid for the lives of the remaining characters, but could still chuckle as Timothy Olyphant took a sprawling tumble onto the floor of a funeral home and narrowly escaped getting his scrotum sliced open by a runaway electric bone saw. Indeed, Eisner’s direction makes a number of admirable choices, seemingly utilizing jump scares for the sole purpose of screwing with the audience, and then jarring them out of their seats as they slowly realize there’s an out-of-focus super-zombie still and salivating in the corner of the room.

The performances are quite adept, establishing a tense and believable dynamic between the three characters. Olyphant has long since proven that he can do no wrong as a small-town sheriff, and he and Mitchell make a convincing married couple, their performances helped along by many effective little moments of dialogue (“Don’t ask me why I can’t leave without my wife, and I won’t ask you why you can leave without yours”). Additionally, the shifting relationship between sheriff and deputy is one of the most fascinating aspects to the film. Between Anderson’s adept performance and the character’s well-written arc, the deputy’s plot stirs a sense of imminent danger and infection paranoia unparalleled since John Carpenter’s The Thing.

As soon as the credits rolled, I typed a single line for this review, demanding that Breck Eisner come down to my theater immediately and pry me loose from the edge of my seat. When I wrote up the film’s balls-out-audacious trailer back in October, I expected this film to be a good bit of cheese – a solid, shlocky B-horror film. What I finally saw was that and much more. Eisner’s direction balances the tone of the film perfectly, injecting just the right mix of horror, comedy, and drama. The allegorical elements are none-too-subtle, from the concentration camps to the good soldier who “didn’t sign up for this,” but they still imbue the film with some welcome depth. The Crazies takes the relatively straightforward premise of “zombies that can think” and turns it into a menacing and memorable piece of horror.

The purpose of an advertisement is to make me want to buy your product, Hollywood. If I don’t see a trailer for your film, I’ll at least feel neutral about it. If I see a compelling, provocative trailer, I may well want to see the film. But if I see a trailer that gives away the whole damn plot (or at least gives me that impression), it will leave me utterly uninterested.

Whether we’re talking about a cheesy, but potentially enjoyable armored car heist or Tom Hanks forging a deep friendship with a volleyball, this has been a problem for a while.

But it’s rare that I’ve seen such an egregious offender as Jim Sheridan’s Brothers:

I don’t need to see this movie. Ever.

Remarkably, in the same evening, I saw an absolutely balls-out-audacious trailer that gave away a TON about its film – Breck Eisner’s “The Crazies” – and yet still left me wanting to see it:

Story structure exists for a reason. You can pitch me a movie without revealing every twist. It’s okay. Really.

Both of these films have their selling points. The acting looks solid in Brothers, and I’m quite pleased to see someone acknowledge the uncanny resemblance between Jake Gyllenhaal and Tobey Maguire. I approve of the The Crazies‘ shameless appropriation of Gary Jules’ “Mad World” (originally written for Donnie Darko), and it looks like potentially fun cheese (although I’ve been burned by that assessment before).

These films may be good or bad, and that’s really not the point. We’re talking about the difference between a book jacket and the Cliff’s Notes.

Tantalize me, Hollywood. Give me a little, and leave me wanting more, and I may just buy a ticket.

*There are two exceptions to this rule:
-Romantic comedies. The quantity of “spoilers” in the trailer had no bearing on my decision not to see Love Happens.
–Marley and Me (only obliquely related, and thoroughly spoilerific).