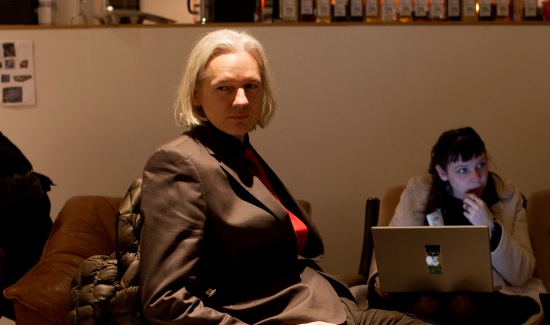 We Steal Secrets: The Story of WikiLeaks
Directed by Alex Gibney (documentary)

Prolific documentarian Alex Gibney (Enron: The Smartest Guys in the Room, Client 9: The Rise and Fall of Eliot Spitzer) is an adept interviewer, but he confronts a serious challenge when it comes to tackling the career and cult of personality of WikiLeaks founder Julian Assange, as well as alleged whistleblower PFC Bradley Manning. The film ends (as of March 2013, an end-credits crawl informs us) with both of its subjects locked in a room for an indeterminate length of time – Manning locked in the Marine Corps brig in Quantico, VA, and Assange in sequestered asylum at the Ecuadorian embassy in London. We Steal Secrets makes no claim of access to either of its principal subjects (although Gibney claims to have met with Assange on an estate in the English countryside, wherein he declined to appear in the film), but relies instead on the swath of publicly available material on both men.

Consequently, the film could be little more than a shallow, pop-journalistic chronicle of these events, but it succeeds in challenging much of the conventional wisdom surrounding the case. Julian Assange was indeed a thorn in the sides of several governments, as well as a crusader for free speech and free information. And yet, he is also an accused sex criminal who has declined to answer the official accusations against him. These events dovetailed into a level of paranoia that I (and Gibney, and many others) found quite alluring when they first came to light – surely the accusations were nothing more than an attempt to embarrass or discredit a man who had stepped on the wrong toes. But Gibney argues quite convincingly that that the internet hivemind’s opposition to Assange’s extradition or prosecution has little to do with the facts of the case, but rather with Assange’s cult of personality. Assange can be nothing more or less than a total guardian of free speech and information – a paragon, or nothing at all. The Internet, in all its subtlety, is unable to accept anything in-between. Nor is it willing to accept the conceptual utility of WikiLeaks as a tool for forcibly open democracy without a man like Assange – who dresses and talks like a James Bond villain – as its charismatic leader.

All of these contradictions come to a head in We Steal Secrets, whose title tells us a good deal more about ourselves as Americans and internet users than it does about WikiLeaks. Gibney focuses on the human side of whistleblowing – specifically, the chat logs between Manning and hacker Adrian Lamo. Manning comes off in a sympathetic, if not precisely admirable light. The secure dropboxing of confidential files becomes the desperate outreach of a lonely, tortured soul in the desert who just can’t come to grips with what he is experiencing – to say nothing of who he is. And for much of the film’s runtime, an uninitiated viewer would have no idea who the source of these chat logs might be, since they appear on-screen with simple, text-based flourishes and distant typing sounds. Manning’s musings become a lone voice in the darkness with no clear provenance. Editor Andy Grieve keeps the pace moving nicely (and makes one particularly haunting montage use of Lady Gaga’s “Telephone”). The film is 130 minutes long, but remains quite gripping throughout. Gibney manages to ask a great many provocative questions of several powerful individuals involved (including the thoroughly candid retired general Michael Hayden, ex-director of both the CIA and the NSA), which mixes nicely with a wealth of archive footage of Assange. Despite his lofty goals, the grudging consensus seems to be that WikiLeaks did little more than embarrass the countries involved. With this film, Gibney may have only accomplished the same for Assange himself, but this still makes an effective chronicle of a story that is very much still in progress.

Update (2013-05-23): WikiLeaks has posted a complete transcript of the film, annotated with their own comments and rebuttals. You can read it here.

Actress and writer/director Sarah Polley is no stranger to putting personal stories on film – her 2011 drama Take This Waltz examines a crumbling marriage (focusing on a housewife played by Michelle Williams). While that fictitious story was undeniably put to film in the wake of Polley’s own divorce, the viewer is left to speculate about the extent to which Polley’s own experience may have informed her screenwriting. Not so with Stories We Tell. In this documentary, Polley brings an intensely personal story to life starring her entire extended family, and the narrative is structured in such a way that would practically prevent Polley from coloring it exclusively with her own perspective. This is a meta-narrative, in which we cut back and forth between Polley’s father (the captivating Michael Polley) sitting in a recording booth reading a prepared third-person account of his life experience, and being interviewed (in first-person) to react to the very same events. The contrast between these two perspectives (each from the same man with varying levels of preparation) is utterly fascinating, and becomes even more so when mixed with the other storytellers. These include Polley’s siblings, relatives, and various old friends of her now-deceased mother, whose life and children are the film’s principal subjects.

The mystery of Diane Polley (Sarah’s mother) is at the core of this film. With this woman dead and gone, all that her loved ones have left are their own memories and perspectives – and the narratives that they construct from them. The film gets at the heart of storytelling as a technique for making sense of the world, and does so in a manner that is utterly free from reproach. The Polley family never once struck me as self-obsessed or navel-gazing individuals. Not only are they a captivating bunch, but they also demonstrate a healthy measure of humility when it comes to rendering this intensely personal (and potentially humiliating) story. You really get the feeling watching the film that if this documentary were to be viewed by no one else except for the individuals involved, they would all be okay with that. This is one of the most earnest personal testaments that I’ve seen since 2008’s Dear Zachary, a film which served a much more subdued and heart-wrenching narrative than what is on display here. The saddest part of this story is that Diane is not around to answer these questions herself, and yet the stories that remain behind feel just as important and vivacious in her absence. This film is nothing short of a masterpiece – hilarious and heartfelt, and brilliantly blurring the lines between documentary and reenactment. It is an act of courage and personal conviction, delivered with an admirable measure of humility.

It’s only in the film’s final act that it shows its hand a bit, and some viewers may find the “making of itself” portion of the documentary to be a bit tedious. For a film nerd like me, it did nothing to diminish the experience, since it only served to further elucidate the precise nature and value of good storytelling. To illuminate how this documentary reluctantly came together only served to add additional weight and consequence to the story. Even as the film’s principal subjects debate who was the most fitting person to render these events into a narrative, it becomes ironically clear that this story ceased to be their exclusive property the moment they decided to tell it. The genie is out of the bottle, but the world is better off for it.