I know what you’re thinking. This film is about a culturally satisfying number of psychopaths. It’s from Martin McDonagh, the bloody-minded, utterly un-PC writer/director of In Bruges (as well as The Lieutenant of Inishmore, which is, to this day, the most disturbing thing I’ve ever seen on a stage). How can it possibly be “cute”? Well I’ll tell you, dear reader. The main character is a drunken Irish screenwriter named Martin (Colin Farrell), who is attempting to write a screenplay for a film called Seven Psychopaths. The very same film we’re presently watching, in fact. The film cuts back and forth between his beautifully imaginative psychopathic origin vignettes and the “real world”, along with occasional revelations that some of his psychopaths are in the actual story of the film we’re watching. Maybe. It’s wonderfully unclear.

Seven Psychopaths seizes on the fundamental truth of storytelling that no idea is completely original. You may think it came from a serendipitous muse that squirted it into your brain from the collective unconscious, but we are the inexorable products of our surroundings, our culture, and most importantly, our stories. Stories we’ve been told, stories we’ve forgotten, and stories we’ve subsequently retold and passed off as our own work. This is a bloody-minded Adaptation. Hugo without the whimsy. It is sickeningly self-aware, and could have felt like a lesser parody of either of those films if not for such a perfect ensemble cast.

Sam Rockwell plays Billy Bickle, professional dognapper. When Bickle’s partner, Hans (Christopher Walken), accidentally steals a Shih Tzu owned by mobster Charlie Costello (Woody Harrelson), the two are forced to scramble to stay alive as Costello ruthlessly seeks out his purloined puppy. While Walken and Harrelson are perfectly cast, the absolute standout is Sam Rockwell, who plays the rather obviously-named Bickle as a relentlessly delightful sociopath. His every interaction with Farrell is pitch-perfect, even as he interrupts each fresh outrage to question whether his screenwriting friend might have a drinking problem. The film also features a solid supporting ensemble, including Zeljko Ivanek and Kevin Corrigan, as well as an outstanding turn by Tom Waits, who manages to turn the simple act of petting a bunny into something wondrously terrifying.

You might notice I haven’t mentioned any ladies yet, and there are several in the film. Abbie Cornish, Olga Kurylenko, and Gabourey Sidibe each have small parts, and they do decent work with what little they’re given. Newcomer Linda Bright Clay is especially strong as Hans’ wife. But this is where the film’s veneer of self-awareness starts to crack a bit. Can a screenplay that’s chock full of crappy, one-note, brutally treated female characters redeem itself by having one of its myriad gentlemen point it out in the third act? My general response would be ‘no’, but Farrell’s hilariously weak defense that “it’s a tough world for women”, and Walken’s wry retort that despite that, most of the ladies he knows “can string a fucking sentence together” completely saved it. 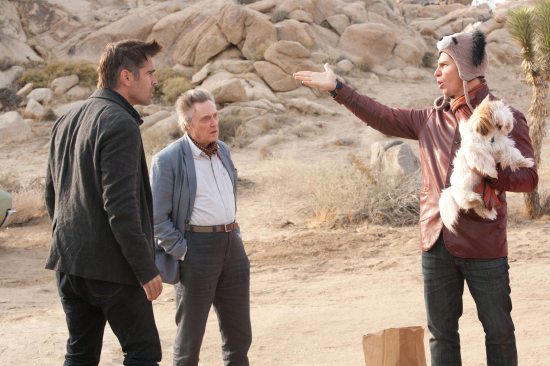 In fact, when the last act of the film drops any pretense of real-world story and has the entire ensemble vigorously debating how the movie should end, it somehow manages to hit every note perfectly. Its self-awareness becomes incredibly endearing, even as it debates precisely what kind of shootout should bookend the story. The film’s most honest moments emerge from this sequence, as Marty questions whether he even wants to write this kind of story anymore. Psychopaths might be a fun idea with which to frame a story, but they do get a bit fucking tiresome when you have to write so many of them.

But whether he wants to keep writing this kind of story or not, McDonagh still seems to be having a great deal of fun with the material. His Irish characters still border on caricature, his racist humor reaches Tarantinoan levels of superfluousness, and his odd fascination with the Vietnamese continues. His creations are born in a world of cartoonish excess, and die with as much frenetic and hilarious bloodlust as the script can muster – unless of course he changes his mind before the film ends. But in a film like Seven Psychopaths, mind-changing is an integral part of the narrative. The film conceives of a great many brilliant characters, then dispenses with any necessity to actually put them into the story. Some might regard this as a cheat, but I simply saw it as a laundry list of possibilities. When Martin McDonagh plays in his sandbox, this is the unholy ensemble that emerges. And as hilariously overdone as it might be, it still felt as fresh and effective as ever.