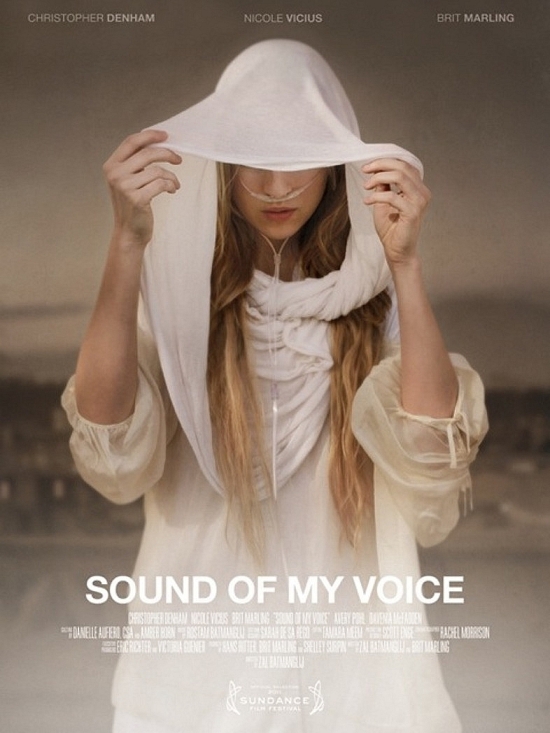 Brit Marling may be one of my favorite voices in indie sci-fi, and I say that even as someone who was not a fan of her well-intentioned flop Another Earth. Marling’s performance was very nearly the saving grace of that film, and is surely one of the best reasons to see her latest outing (with director Zal Batmanglij), Sound of My Voice. Marling plays a secluded cult leader, Maggie, who claims to be a time traveler from the year 2054. Peter Aitken (Christopher Denham) and Lorna Michaelson (Nicole Vicius) are a couple working tirelessly to infiltrate the cult, hoping to use hidden cameras to capture Maggie’s persona on film, and expose her for the fraud that she surely must be.

“I’m not petty,” Maggie says in one scene, “I don’t really care if people believe me.” Marling plays the charismatic cult leader as a master manipulator – exuding vulnerability and menace in equal measure. Bits of sincere, self-aware dialogue seem perfectly crafted to reinforce her story. In fact, the film uses Maggie’s story effectively as a subtle framework to explain the cult mentality. There is a dark, secret future, she explains, and only a select few will survive it. You’re special. You must be, or you wouldn’t believe my story. You wouldn’t have passed all of our little tests. You wouldn’t be committed to our group forever. The group’s trust in Maggie’s Terminator-ish future fable acts as a kind of glue to bind them all together. Many details, such as that Maggie grows all of her own food because she’s allergic to all of the toxins in our time period, would work as effectively for a plain old vegan commune as a futurist cult – and yet they add to her credibility without requiring her to produce a shred of actual evidence. These mythological elements are bolstered further by a series of elaborate security rituals – the cult members strip naked and scrub themselves off before being transported blind to the meeting place, and are not admitted until they perform a complex “secret handshake”. 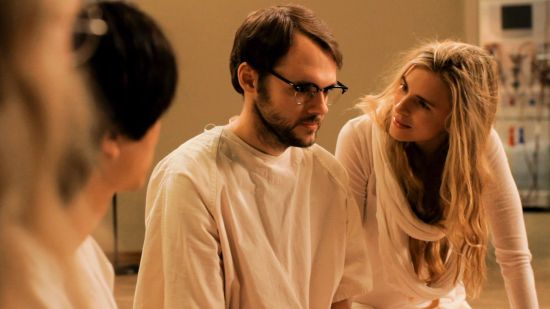 In addition to this well-established group dynamic, the film functions brilliantly as a paranoid thriller. Denham’s performance is impressive, increasing the tense atmosphere in the room with the slightest glance or twinge of the eye, and what’s more, Peter is a particularly well-drawn character. Many films would set up documentary filmmakers without any thought to their [presumably noble] inner lives – this film made some bold choices, and they pay off nicely as Peter is forced to blend truth and lies in order to maintain his cover. While his backstory is established by way of a rather clunky voice-over at the beginning, it still functions as convincing reasoning for why he is so desperate to expose Maggie.

The film doesn’t live or die on the veracity of Maggie’s story (which by its very nature cannot be proven conclusively), but rather on whether or not this well-intentioned couple will be exposed. And unfortunately, the weak link in that chain is Lorna. This is due in part to Nicole Vicius’ performance, which isn’t stellar – but it is also due to the writing of the character. The film reveals (using the same clunky voiceover method) that Lorna was a teen party girl, trying every kind of drug and burning out before she reached college-age. Which is a fine backstory, but it may as well have been absent, for all it matters as the film goes on. Lorna’s reason for participating in this deception is never established beyond the couple’s relationship, and while the two actors have decent romantic chemistry, it is Denham who completely carries the tense scenes in which the couple debates their next move. As the film goes on, Vicius is sidelined and forced to take on the boring role of the jealous girlfriend, competing ineffectually with Denham and Marling’s far more interesting dynamic.

Much of the film’s ending seems contingent on the various bits of weirdness that get introduced over the course of it. A creepy dude named Klaus (Richard Wharton) hangs around the whole time, and may or may not be the real power behind the group. An unidentified woman crawls around her hotel room searching for bugs. A little girl stacks black Legos in her room (while her dad does…something…with his laptop). This ending worked for me in much the same way as Richard Kelly’s 2001 film Donnie Darko, wherein all of those strange moments seemed deliberate rather than haphazard. When so many films are rightfully accused of “weirdness for weirdness’ sake”, it’s refreshing to see a film that can be weird in a way that feels bold and calculated. Even the last audible line of the film adds to the mystery.

One thought on “Zal Batmanglij’s “Sound of My Voice” – A subdued, but effective thriller”