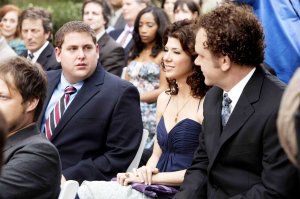 In this film from Jay and Mark DuPlass, most of the film’s dialogue was improvised by the actors, and I can only imagine what kind of direction the brothers gave to Jonah Hill as the title character. Creepier… Wider eyes… Like you’re boring into my soul with a searing fireplace poker… This film presents an utterly bizarre, almost marriage-like relationship between Cyrus and his mother (Marisa Tomei), and an instant antagonism for her budding romantic interest, played surprisingly straight by John C. Reilly. All three actors boast a fantastic chemistry, but it’s Jonah Hill’s performance that is easily the most memorable and comedically disturbing. 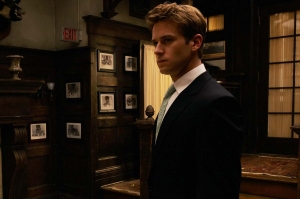 I don’t generally give credit to an actor simply because of the likely-difficult circumstances of production (I’m sure Sam Worthington’s Avatar shoot was no picnic), but Armie Hammer managed to navigate the movie-magic vagaries of playing composited crew-rowing twins while simultaneously imbuing each of them with a distinct and memorable personality. The level of sympathy for these characters will likely depend on your feelings on the Facebook/Harvard Connection litigation (ongoing as of this writing), but Hammer’s take on the brothers Winklevi never waivers from portraying them as consummate and forthright “gentlemen of Harvard”. Even as they seem determined to bring down the ostensible antihero of the tale, they never quite seem like true villains – they are honest, self-conscious, and perhaps a little naive. Hammer manages to convey all of the dimensionality and noticeably distinct personalities amid Sorkin’s signature rapid-fire dialogue, turning in two of the most memorable performances in an equally impressive cast. 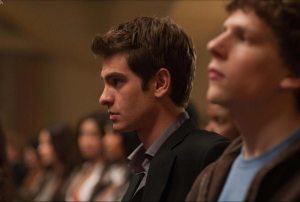 Minor spoilers for the film, and to a lesser extent, real life, will follow.
The effectiveness of The Social Network hinged on a great many things, but easily the most important aspect of the film is the erstwhile friendship of Mark Zuckerberg (Jesse Eisenberg) and Eduardo Saverin. Without Zuckerberg, there’s no Facebook. Without the relationship with Saverin, there’s no movie. Garfield and Eisenberg had a great comedic chemistry (a scene in which Saverin explains to Zuckerberg his treatment of a pet chicken is easily one of the funniest in the film), but Garfield also played the character with such earnestness and emotionality that this relationship and its inevitable dissolution were utterly captivating to behold. What happens to Saverin is business, to be sure, but the film manages to also sell it as a significant personal betrayal. While this owes a great deal to Sorkin’s writing, it is Garfield’s heartbreaking final scenes that make it succeed so masterfully.

While Garfield is receiving this award for The Social Network, I was also impressed by his turn in Mark Romanek’s Never Let Me Go. I can’t imagine what sort of Spider-Man he’ll be, but I’m a lot more interested in finding out after such a remarkable year of introductory performances.

While Jacki Weaver may have played my favorite villain this year, it is John Hawkes who beats her out for the most terrifying screen presence. Given his unassuming and light comedic performance in 2005’s Me and You and Everyone We Know, and his thoroughly likeable run on HBO’s Deadwood, I was completely blown away by Hawkes’ transformation into the heroine’s wiry meth-addict uncle. From my original review:

His physique was more or less unchanged (except for a slightly graying beard), but his demeanor was something new and thoroughly intimidating. Every word Teardrop says seems to carry a simmering threat of violence, and although the character actually perpetrates very little, Hawkes brings a fiery intensity that makes him downright terrifying to watch.

He and Jennifer Lawrence match each other’s grit quite nicely, and their unlikely alliance was crucial to the film’s effectiveness. 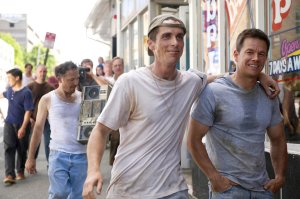 As I noted in the podcast review, Christian Bale has mostly approached his last few years’ worth of roles in a gruff and humorless fashion, and the resulting performances have not been too impressive. The moment Dicky Eklund steps into frame in the film’s opening street scene, I forgot all of that. This character is such a firecracker. As Eklund saunters down the streets of Lowell, Mass. greeting every inhabitant he comes across, Bale utterly oozes with charisma. His physical and verbal commitment to this character is unparalleled in this cast or any other film this year.

This is the self-destructive crackhead you’d love to be friends with. At the outset, he’s wiry, twitchy and completely high in every scene, but just a load of fun to be around. He plays the most dysfunctional member of a severely dysfunctional family, and yet every one of his early scenes is an absolute pleasure. Minor spoiler, revealed in the trailer: When the character detoxes in the second half of the film, Bale manages to make the personality change believable, and yet still keeps the character completely engaging even without hopping uncontrollably as he did in the first half. This is the best Bale performance in several years, and easily boasted enough screentime to rightfully be considered for Best Actor. But the Academy has spoken…

Click here to see the rest of the 2010 Glennies.