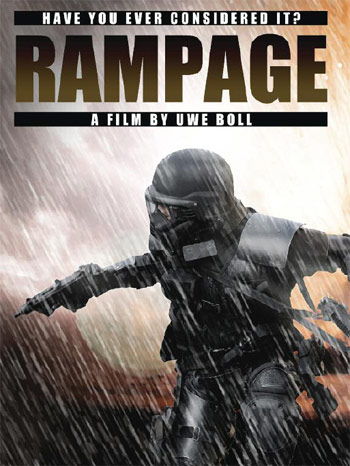 The film: Postal.
The scene: A large public square.
A small-town crowd gathers before a dais holding several local celebrities and media. The film’s director, Uwe Boll, is interviewed on camera about the rumors that his films are funded by Nazi gold (which he happily confirms). Verne Troyer (best known as Mini-Me from Austin Powers) sits in a wooden high-chair and introduces the town’s latest toy sensation, the Krotchy doll. A mascot-sized version of this doll – basically a huge, anthropomorphic dick – stands proudly on the stage nearby. A paunchy man dressed as Hitler barks into a microphone that terrorists are coming. A fight breaks out between the dick-man and Boll. Several Arab stereotypes rappel down the side of an adjacent building and start firing indiscriminately into the crowd. The cops, terrorists, Nazis, dick-man, Boll, and a nearby barista all pull out guns and start shooting each other. A man in a motorized wheelchair is graphically wounded and starts rotating uncontrollably. Boll personally shoots three small children (including a happy boy holding a lollipop), and we see several lingering shots of their slow-motion blood-splatter. The director catches a bullet to the crotch, and manages to squeak out one last line before collapsing: “I hate video games…”

Thus spake Uwe Boll, that prolific and panned writer/director of an untold number of video game adaptations. I can assure you, dear reader, the scene above is not an aberration – of the three Boll films I’ve seen, not a single moment strayed from the nonsensical, immature, and patently offensive formula you see above.

His latest outing, Rampage, is not an adaptation of a video game, but rather a story of a young man (Brendan Fletcher) who becomes dissatisfied with his life and the society he lives in, and decides to go on a killing spree. Now, please brace yourself, because my shocking admission is this – the first act of Rampage reminded me rather favorably of Gus Van Sant’s Elephant. Like that film (which was a loose dramatization of the Columbine shootings), Boll prefaces his explosive finale with an impressive degree of character development. While he proceeds with a fraction of Van Sant’s subtlety or narrative coherence, he still manages to effectively convey the important points about the young, disturbed man who is Bill Williamson. He hates his life. He hates his parents. He hates America, global warming, and the Iraq War. He hates the barista who made him a piss-poor macchiato. These scenes are intercut with Williamson’s video manifesto, in which explains his various beefs with America (using the same half-dozen lines of nihilistic claptrap repeated over and over). Fletcher’s performance isn’t demanding or spectacular, but it’s effectively chilling, and gives some surprising depth to the character. While this act could have used some improved editing, I can’t argue with its effectiveness, and it showed some remarkable restraint on the part of the writer/director. 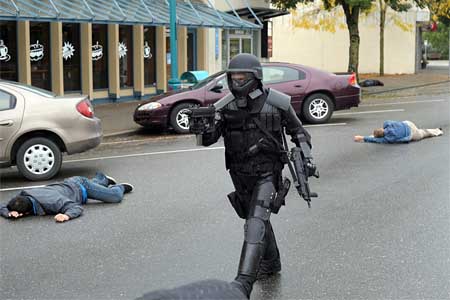 And then the “fun” begins. Bill drives a remote-controlled van into a police station and detonates a massive bomb (which conveniently displays “GAME OVER” to the approaching cops before vaporizing them). The ensuing CGI explosion looks like something out of Independence Day, complete with the classic rear-view mirror shot as Bill peels out to avoid the massive, car-tossing fireball. He dons a glorious suit of Kevlar, pulls a pair of never-ending submachine guns, and proceeds with an epic and sadistic killing spree. Bill Williamson is the man with the plan, demonstrating ingenuity and invulnerability worthy of Jack Bauer, but for no grand purpose apart from mass murder. Perhaps it’s my massive exposure to cinematic violence speaking, but Boll actually manages to make this heinous assault on innocent life seem…cool.

And that’s how uncomfortable Rampage is. The film glamorizes violence in a way that’s really no worse than stylistic bloodbaths like Bad Boys 2, but proceeds with a disturbing level of sadism and nihilistic fervor. The film applies the logic of the “torture porn” genre to a gleeful shooting spree, rendering the audience partially complicit in the horrors to which they’re choosing to subject themselves. The juxtaposition of these themes with Boll’s over-the-top action direction is surprisingly effective. And in a sequence that could just be nonstop, mindless shooting, Boll manages to craft some remarkable moments of tension (a scene in which Bill quietly enters a crowded bingo hall was far more terrifying than any of the moments in which he just stormed into a building shooting).

The film’s ending is laughable and thematically dubious, and much of the acting and improvised dialogue was downright awful. But this was a tense and riveting film – I couldn’t take my eyes off of it, despite wanting to at several points. Is it a good film? Very nearly. And it’s easily the best thing I’ve seen from Boll.