I have an abiding respect for Kevin Smith. Between college Q&As, prolific tweeting, and a hilarious podcast with his longtime producer and friend Scott Mosier, here is a man who wears his entire life on his sleeve. A man as likely to talk about his first sexual experience as the time he accidentally pooped in the shower. A man who constantly admits the breadth of his ignorance, never stops calling himself a fat bastard, and freely admits that his writing is terrible and that he has no directorial style. But despite his posturing, he has proven himself a reliably effective screenwriter and an occasionally brilliant director. He’s carved out a well-fitting niche of self-promotion through self-deprecation, and on those rare occasions when he isn’t funny, he’s nearly always endearing.

And then he goes and does something like this.

Cop Out (originally called A Couple of Dicks) is the story of Jimmy (Bruce Willis) and Paul (Tracy Morgan), a pair of no-nonsense cops who play by their own rules. Naturally, “their own rules” amount to a level of brutality and incompetence seldom seen outside of airport security, and they’re immediately suspended. And do they have to give up their badges and guns? Of course. And is Tracy Morgan still dressed up like a giant foam-rubber cell phone as the captain bawls them out? You betcha.

After their suspension, they keep right on acting as cops, trying to retrieve a priceless stolen baseball card from a ruthless drug kingpin, Poh Boy (Guillermo Diaz), who wants to take over the entire east coast drug trade by way of a magical USB thumbdrive. They join forces with Dave (Seann William Scott), an incompetent parkouring thief who spends nearly every moment verbally abusing them. Or repeating whatever they say. Oh, and there’s a kidnapped drug moll…or possibly a nun (Ana de la Reguera), whose sole language is “fuckin’ Spanish”. Nearly every one of her lines will call you out for the hijo de puta you are, and she serves almost no purpose in the film except as a comely MacGuffin. 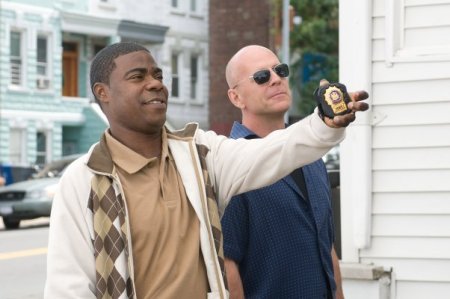 The first act is frankly painful to sit through… At several points, the characters stop just short of winking at the camera as they announce that all of their tactics and dialogue are stolen from better movies (“It’s called an homage!”). But even as Tracy Morgan gradually started to amuse me, Bruce Willis seemed completely unsure of what movie he was in. And before too long, his confusion spread to the audience, as the plot took one bizarre turn after another. Seann William Scott is amusing, but this character is nothing new for him, and it’s never entirely clear why these two cops would involve themselves with him. Guillermo Diaz is almost completely wasted in this film, losing most of the charm and dark humor he showed on Weeds in favor of playing a generic, humorless dick. And the less said about Rashida Jones’ vacuous subplot, the better.

I don’t want to spend much more time on the plot of this film because frankly, it doesn’t seem like writers Robb and Mark Cullen did either. The film strives to be a buddy cop flick in the tradition of Beverly Hills Cop, but ends up being something more akin to Showtime or Hollywood Homicide. And I can’t elaborate on that comparison any further, because like those films, Cop Out is almost completely forgettable.

It is only because I’ve liked Smith’s other films that I even feel like talking about this one. He didn’t write it himself, opting instead to work with the pair that wrote an abyssmal Showtime pilot called Manchild for Smith and several others (his subplot is just about the only funny part of it). The action direction is definitely something new for the filmmaker, but it’s nothing terribly complex, given the limited demands of this genre. Dave Klein’s cinematography is striking at times (this is the guy who shot Clerks?!), but the look of the film is wildly uneven, with some scenes seemingly taken out of completely different films.

The film inexplicably gets fun at around the second hour, but I certainly can’t call it good… At the end of the day, Cop Out seems little more than a bewildering evolution for its filmmaker. And like the Neanderthal before it, I can’t help but hope it will wander off into some corner of Eastern Europe to die.

Sorry, Kev. I hope you get writing again soon. If your next film really is as good as Chasing Amy, I’ll happily give this one a pass.